The Age of Apocalypse and the Power of Comics

Posted on August 20, 2018 by Jeremiah Jones-Goldstein

A couple of weeks ago Chris and Reggie released their 100th episode of the Cosmic Treadmill podcast. The topic was the Marvel event – Age of Apocalypse. After listening to the first episode I hardly remembered the story in the comic. I talked to my brother about it and he had a completely different experience with that series. This a special guest post that he wrote and I hope he’s inspired to write more. Enjoy.

A few weeks ago my brother and I talked briefly about Marvel’s Age of Apocalypse X-books. This was the five or so months back in the mid 90’s where all the X-books ran a story-line where Legion, Professor Xavier’s son, went back in time to kill Magneto and accidentally kills Professor X. His death leads to a change in the timeline where Magneto turns good and Apocalypse takes over the world. My brother had very little memory of the event. He remembered it happening but couldn’t recall many of the details. I, on the other hand, have very vivid memories of the story-line because I read the first few issues in the hospital.

In early 1995 I had managed to flunk out of Boston University, was living in an apartment in Boston (technically Allston), and working in a liquor store. It was not the happiest time in my life. In early February I began losing vision in my right eye and the doctors eventually diagnosed the cause as a brain tumor. I had had extremely bad headaches for a long time and had problems concentrating and focusing at times and that all turned out to be related.

At the time I had not been reading comics for about five years. I stopped reading them around my freshman year of high school. I had a buddy who worked in a comic shop, and my brother started reading them again around the launch of Image, so I wasn’t completely unaware of the comic world, but was pretty separated from it. 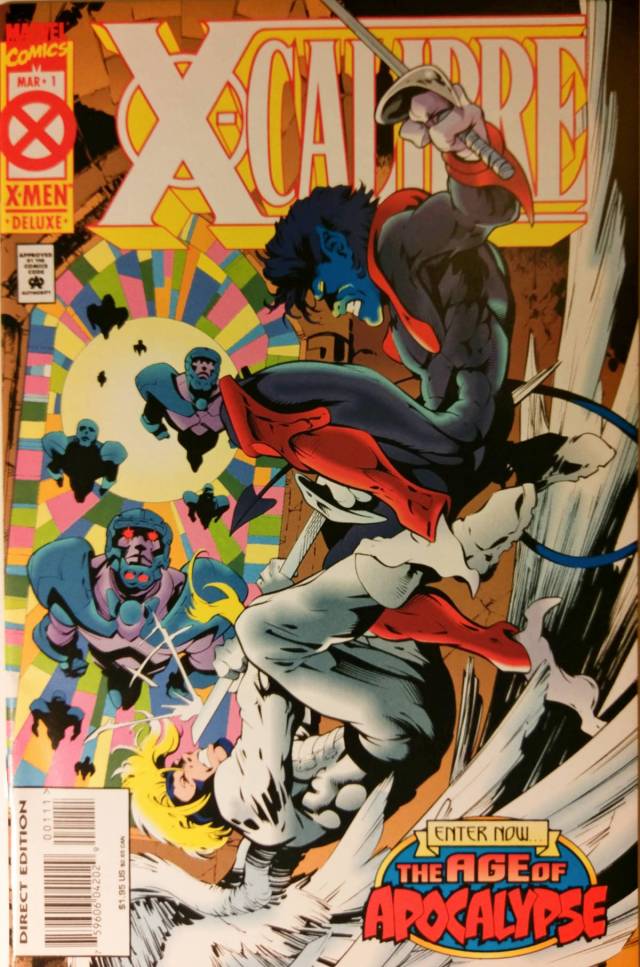 The day after the surgery my friend Bernie came by the hospital to visit me and he brought a familiar brown bag. In it was Robin V4 #15, and two of the first issues of Age of Apocalypse. I’m not 100% clear on which two, I think it was X-Calibre #1 and Astonishing X-Men #1. I read the whole series so many times over the next few months that it’s a little fuzzy. I remember being confused as to what was going on with the whole thing, but falling in love with it immediately. Bernie came every day I was in the hospital, which is something I’m eternally grateful for, and single handed got me back into comics.

It’s hard to overstate how profound an effect reading comics again had on me over the next couple of months. It was winter in Boston, I was out of school, depressed about the surgery and the effects the tumor had had on me, feeling like a failure, broke most of the time, and just generally in a very dark place. I didn’t even get along with the twerp I shared an apartment with. Bad as things were, each week I got to look forward to a couple of new issues of Age of Apocalypse books. 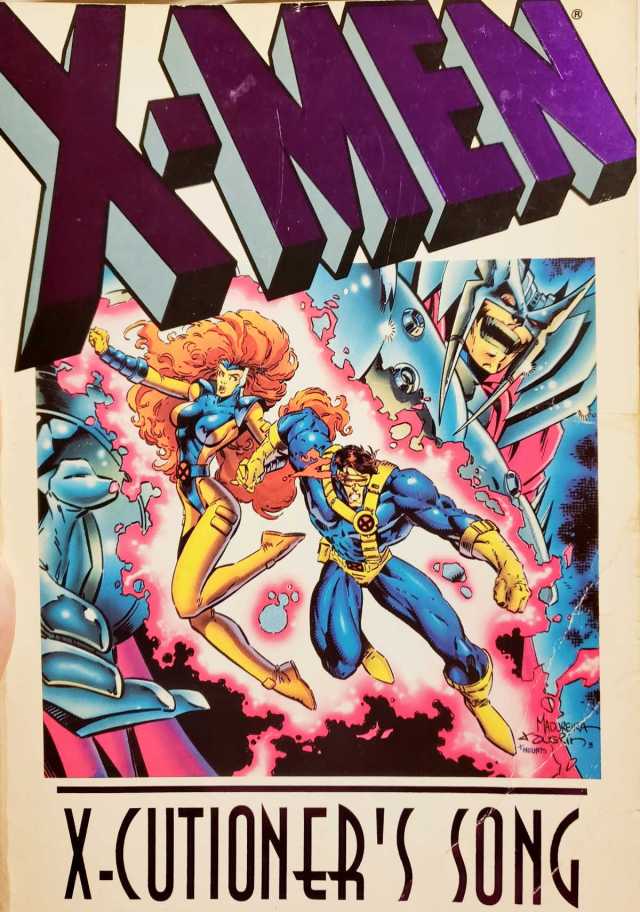 Every Wednesday during my lunch break at work or after I would go down to the New England Comics that used to be on Harvard Ave and pick up the new issues and maybe one or two other things depending on what I could afford. When I think back on that store and those weekly trips it fills me with a happy feeling that’s more than nostalgia. I remember after one trip back home during those months my mom had given me a few bucks. It wasn’t a ton and was meant to buy food, but I ended up using it to buy the trade paperback of X-Cutioners song at Comicopia in Kenmore Square. My logic at the time was food wouldn’t last, but I could read the trade over and over. It probably wasn’t my best ever decision, but I stand by it.

I mentioned that I worked in a liquor store at the time. It was a place called Marty’s. I was 19 at the time and not old enough to drink, but working in a package store it wasn’t hard to get guys to buy for me. I did that once in a while, mostly because I wanted to save my money for comics. Given my depression at the time, I often wonder if Bernie bringing me those comics that day keep me from a much darker path. Given my addictive personality I’m pretty sure he did. Bernie and the Age of Apocalypse.

Comics have always had a healing and comforting quality in my life. My parents got divorced when I was very young and it was not too long after that comics became a part of my life. I don’t remember exactly how I started reading but I remember moments like reading a stack of 70’s Hulk and Thor comics at a family friend’s house, or picking up issues of All Star Squadron at ‘The Stationary’ in Springdale Connecticut where I grew up. I remember getting our first issue of G.I. Joe with my dad from a drugstore we stopped at on the way to visit a friend of his on one of our weekend visits.

More than all that though I remember my father bringing my brother and I stacks of comics whenever we were home sick from school. To this day when I get sick, all I want to do is lay on the couch and read comics. 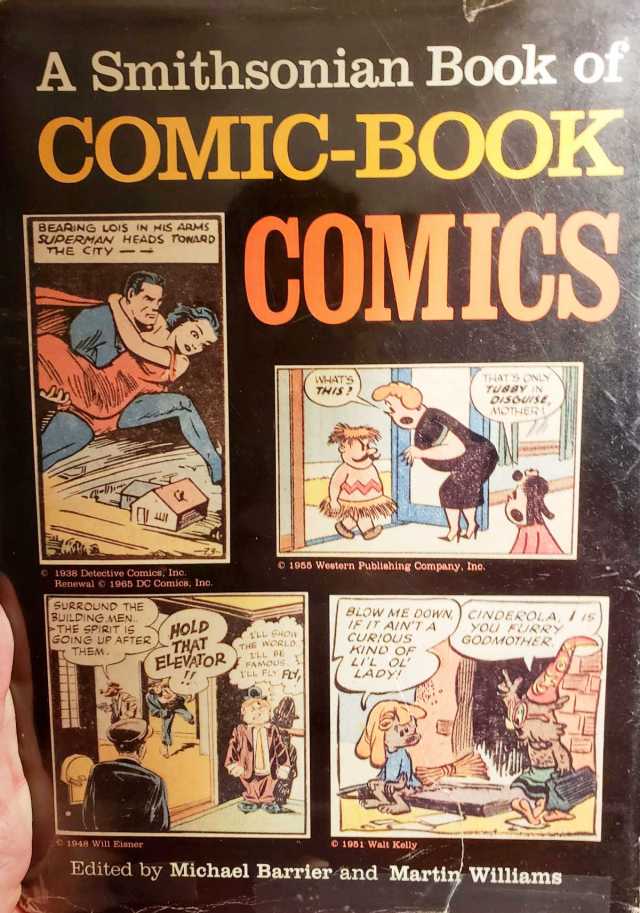 For my ninth birthday, my father gave me the Smithsonian Book of Comic-Book Comics, which may be the most prized thing in my collection. It’s full of old comics from Carl Bark’s ‘Letter to Santa’, Superman, Little LuLu, and Captain Marvel. They’re printed on regular paper and not glossy, but it FEELS like a big comic book, and smells like old comics. It is directly responsible for my love of so many older characters and probably the reason I have eight Don Rosa Uncle Scrooge prints hanging in my bedroom. 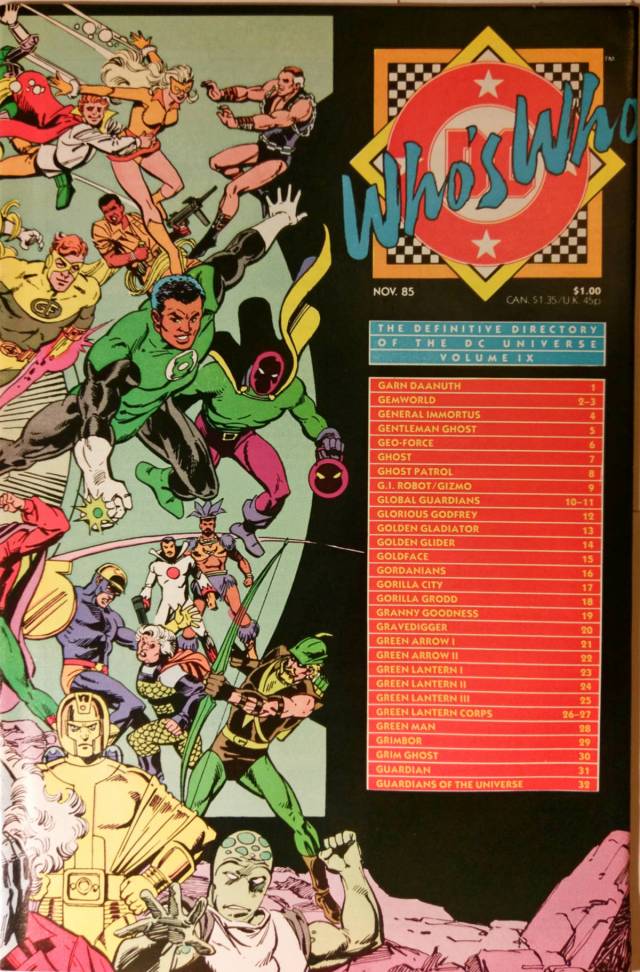 I used to be really afraid of deep water, specifically being out on boats in the ocean. I’d seen Jaws 2 and 3 a lot and was terrified of sharks. A family friend had a sailboat and took us out on it once. I spent the trip with my head buried in DC’s Who’s Who #9, the one with John Stewart in the prominent spot on the cover. I could probably have recited the entry for Global Guardians by the end of that boat ride.

That still works for me today. Just the other night I watched a few episodes of the tv show ‘Channel Zero’ which completely creeped me out. Before I went to bed I read The Highest House #6 to take the edge off and it worked.

It’s not a stretch to say that comics are directly responsible for most of my very close friendships in a roundabout way. Outside of my wife (who I think the universe would have pointed me to even without comics), Bernie, and my brother, nearly every person I spend time with I met as a result of taking a job at First State Comics (may it Rest in Peace). It’s weird to trace things back and see why they worked out like they did, but it’s true. I moved to Delaware not too long after my surgery and started getting back into comics. After being here a while I needed a job that would allow me to go to school full-time and applied at the comic shop.

I got a call a few days later to come in for an interview and was soon hired. While working there I met one of my best friends, Steve, and also helped hire a woman named Liz. When the shop closed due to rent issues Liz went on to work for Borders Books. I eventually applied and, based on her recommendation, got a job there. At Borders I met a huge swath of people that I’m still very close with. One of them, Nick, moved on to my current company and talked me into applying. Based on his and another friend’s recommendation I was hired there. Everyone else I spend time with now I met through this job. When I got married in 2011 my brother was my best man, Bernie was in my wedding party, and everyone else I met either at the comic shop, Borders, or my current job. If Bernie hadn’t brought that bag of comics to me while I was in the hospital, and the Age of Apocalypse books never came out, my life would be completely and utterly different than it is. 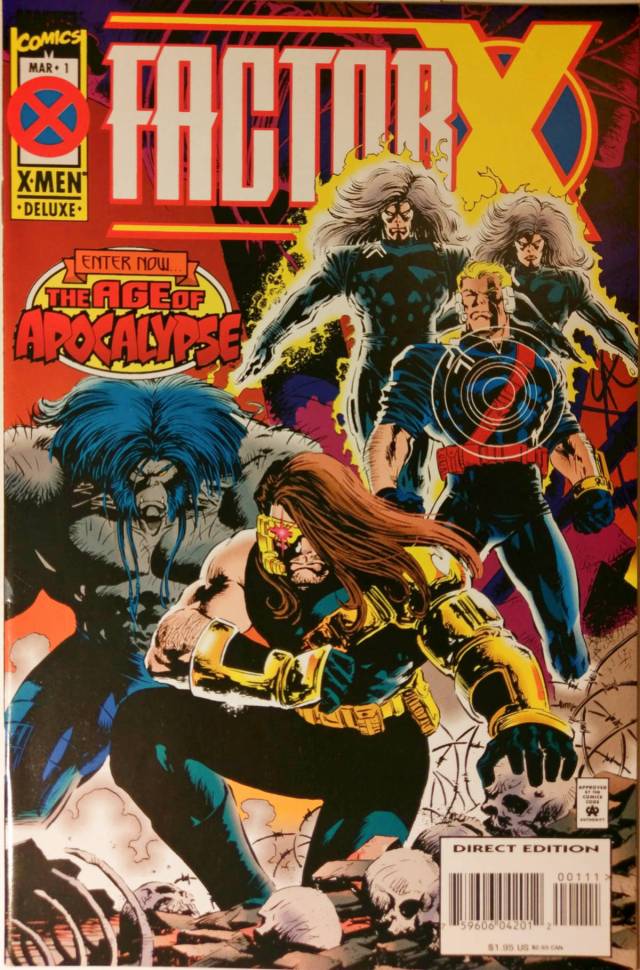 Comics are like that. It’s a hobby that becomes a passion and maybe even a lifestyle choice. In a few weeks I’ll be going down to the Baltimore Comic Con for three days to immerse myself in comic culture with people who feel the same.

Every comic fan probably has similar stories, moments where comics were a much larger force in their lives than people might imagine. I’m not sure I’m writer enough to really understand why, but I think it’s probably similar to baseball in Field of Dreams. They’re something that connect us back to our past selves, but also something we know our future selves can look forward to. They give us something to collect and enjoy. We can endlessly debate characters and story-lines. In superhero comics, there’s often a pure form of morality that will always appeal to the good in us, and in the enormous variety of comics there’s something that we can all connect with, be it horror comics or good natured Archie comics, or sometimes both!

This entry was posted in Uncategorized and tagged age of apocalypse, guest, X-men. Bookmark the permalink.