Posted on June 20, 2018 by Jeremiah Jones-Goldstein 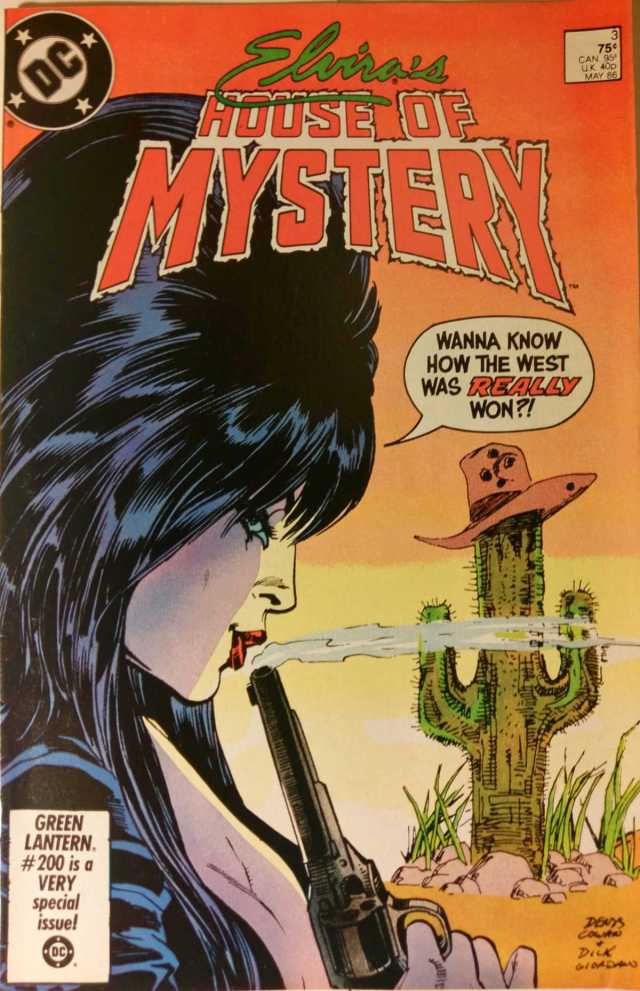 I’ve got to admit that I’ve got a crush on Elvira. I think that Cassandra Peterson’s alter ego is funny, pretty, and very entertaining. How she dresses as the character doesn’t hurt either. Over the last couple of years I’ve come across a couple of issues of this comic (this one twice as it turns out). The first one I found was in a store in Florida that sold Pop Culture art, framed prints, statues, and other collectibles. The manager had recently purchased a small comic collection and was selling off the individual issues in a corner in the back of the store. I cannot resist a pile of comics some place that does not normally sell comics, I just feel like there has got to be something good in it.

The series was an attempt to bring back the House of Mystery title with a new host, Elvira. Elvira introduces the stories and is featured a bit more than the original host Cain. The series also features a story that Elvira is on a quest to find Cain the caretaker and the House of Mystery is helping her. I do not know the details as this is the earliest issue of the story that I have. There series ran for 11 issues and had a special. An interesting note about this issue is that it is the only one to run without the comics code approval on it. I imagine it is because of violence and semi-nudity. With that in mind let’s get to the story. 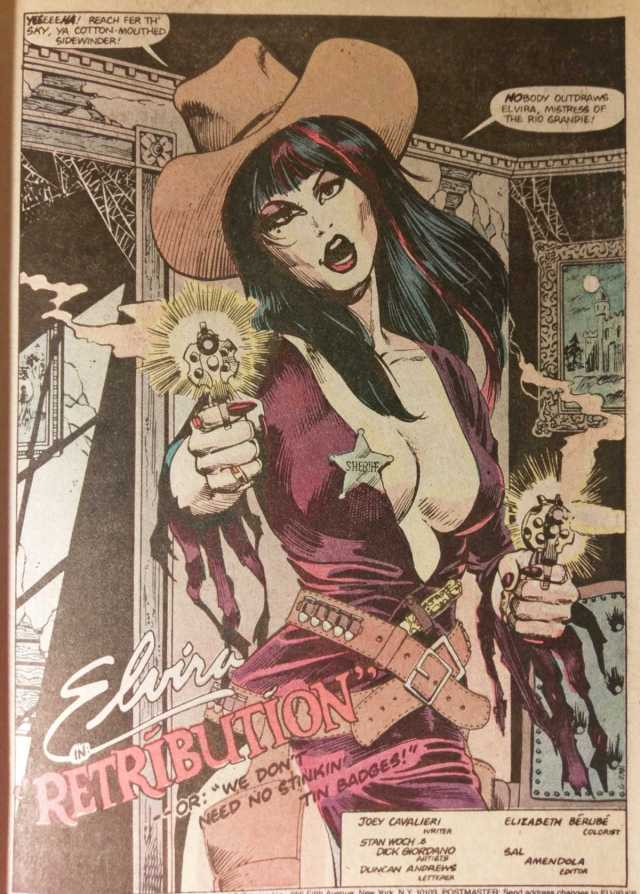 The first story is a western, as if we couldn’t tell from the splash page. It begins with a little exposition and the House of Mystery telling Elvira that she must continue with her quest to find Cain. Elvira, cowboy hat, six guns and all is then delivered to the old west. She is being serenaded by a skeleton cowboy riding a horse and singing a ballad about Nick Dundee and Hangin’ Rock. We come across a young woman bathing in a pond and being harassed by the very same Nick Dundee who has the woman’s clothes. He says that she can have them back she just needs to come get them from him. Of course she’s naked while bathing but she’s desperate. She says that if he gives her back her clothes she won’t tell her fiance. 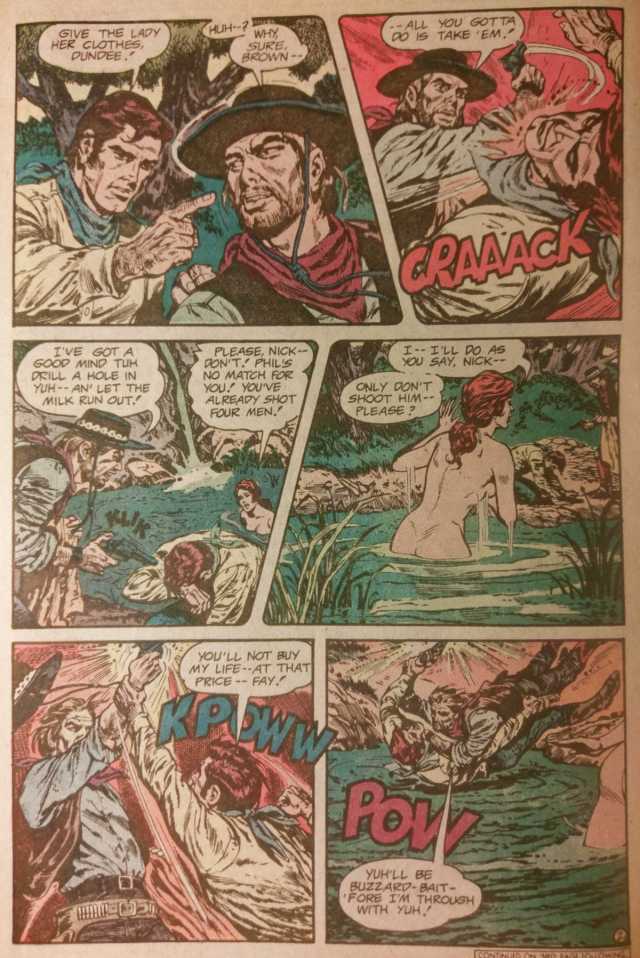 Just then a man comes up behind Nick and tells him to give the lady her clothes. Nick clocks the guy and threatens to shoot him. In order to prevent her fiance from being shot our heroine agrees to come out of the water. That was all the distraction, Phil, the fiance, needed to grab Nick’s shooting arm and wrestle him into the water. The two men have a viscous fight and Phil overcomes Nick. Phil and Fay ride away and Nick plots revenge. Meanwhile our singing skeleton reminds us that he’ll see Nick at hanging rock.

The scene shifts to Phil and Fay getting married. As they exit the church they embrace and kiss. Suddenly a shot rings out, Phil’s been shot in the back. Nick has fired from a nearby hotel window and plans to make his escape before anyone figures out where the shot came from. Fay in her white wedding dress, now covered in blood, mourns her dying husband. Nick trying to make his escape is stopped by the local sheriff who gets the draw on him. A local mob surrounds the jail demanding that the sheriff release Nick to them so they can deal their mob justice. Instead the sheriff gets Nick on a train to, you guessed it, Hanging Rock, so that he can be “hanged legal an’ proper”. 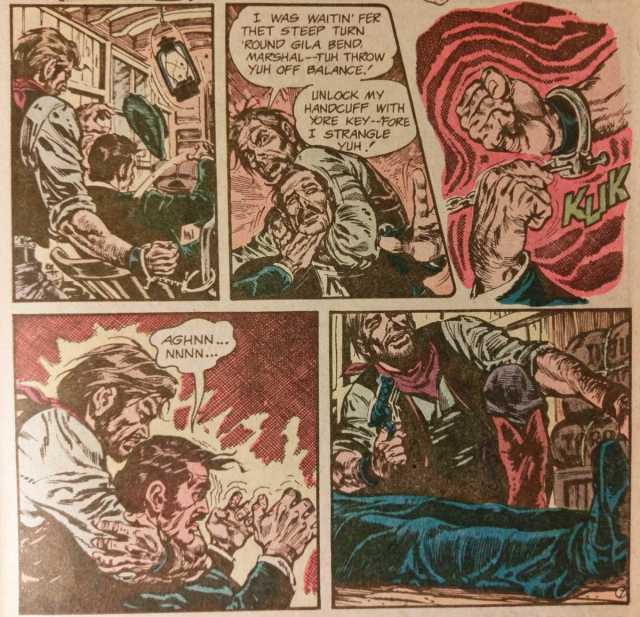 The sheriff should have turned Nick over to the mob. On the train ride to Hangin’ rock Nick overcomes the sheriff when they round a sharp turn. Nick gets the sheriff to unlock the cuffs before choking him out so that he passes out. Nick then climbs up to the locomotive where he tells the engineer to stop the train. It just so happens that the engineer is Phil’s father and he’s plenty angry with Nick Dundee. Nick shoots him and tries to stop the train himself, but cannot. 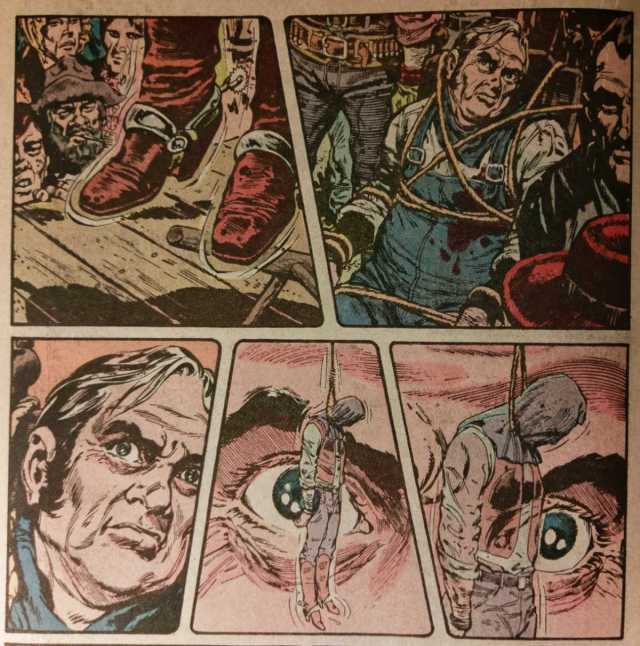 As the trains runs out of steam it pulls into the the next station where the mob is waiting to take Nick to Hangin’ Rock. As Nick is lead to the noose he starts babbling about a vision he’s having. He sees Phil’s father watching him and he starts to lose it. As Nick hangs the ghost of Phil’s dad watches and our singing cowboy finishes his song. Elvira is returned to House of Mystery and she loses the cowboy gear while getting ready for the next story. 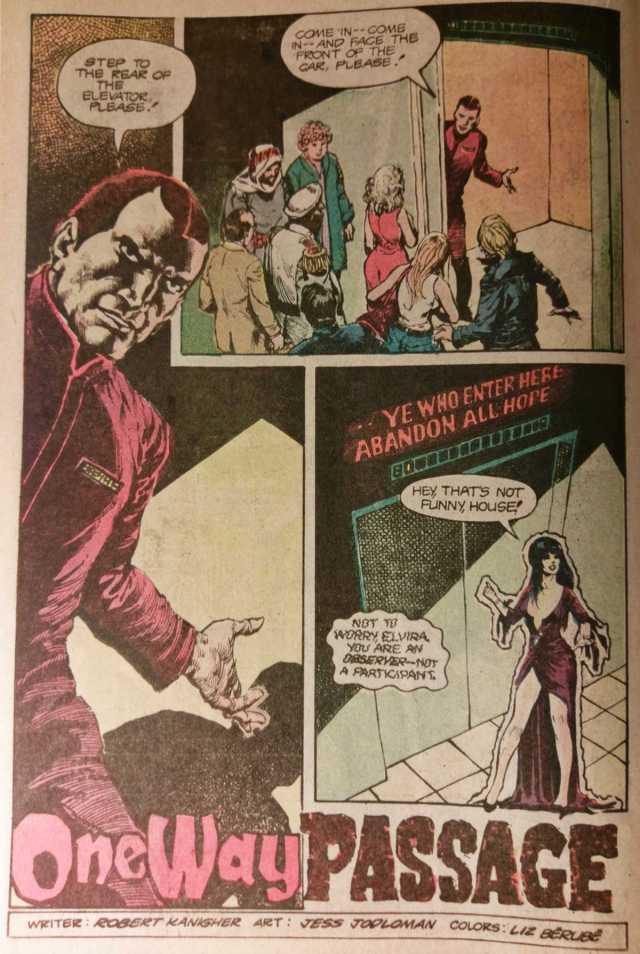 Elvira witnesses a diverse group of people enter an elevator that has the sign “Ye who enter here abandon all hope”. On the elevator is the conductor and an interesting group of characters who all state that they need to be someplace else. There is a pretty blonde, a white man with glasses who has to collect his rent. There is a large black man in white military dress saying he has to get back to defend his nation. There is a another white guy with glasses that says he has to get back in order to to take more pictures of children’s portraits. There is also a white couple, an older white woman, and an Arab.

Just a quickly as everyone got on the elevator the conductor stops and lets each person off saying that they have reached their floor. As they exit they keeping talking about how they are supposed to be somewhere else but they also don’t really question what is going on. The young white couple are the last ones off. They find a fire exit but as they go through the door they discover that they are not in a building but instead it is HELL! 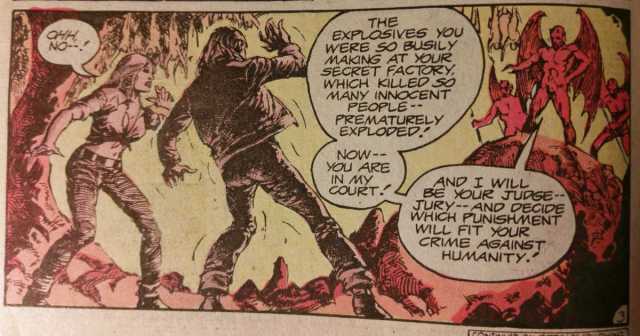 They are greeted by a winged demon who explains that they are here because the explosives they were making went off prematurely and killed them along with a lot of innocent people. They are sentenced to hang upside down for eternity. Next up is the landlord trying to collect his rent. It turns out he had a heart attack, and for the crime of being a slum lord he will “live” forever naked covered in rats, in hell’s version of one of his slum tenements.

The older white woman was killed by a hit and run driver. She’s being thrown naked into a lake to drown with her victims because apparently she likes to poison people. She’s dragged under while still conscious and tied down by corpses. The child photographer apparently also strangles the kids that he’s been taking pictures of. His punishment is to be squeezed and swallowed alive by a giant snake. 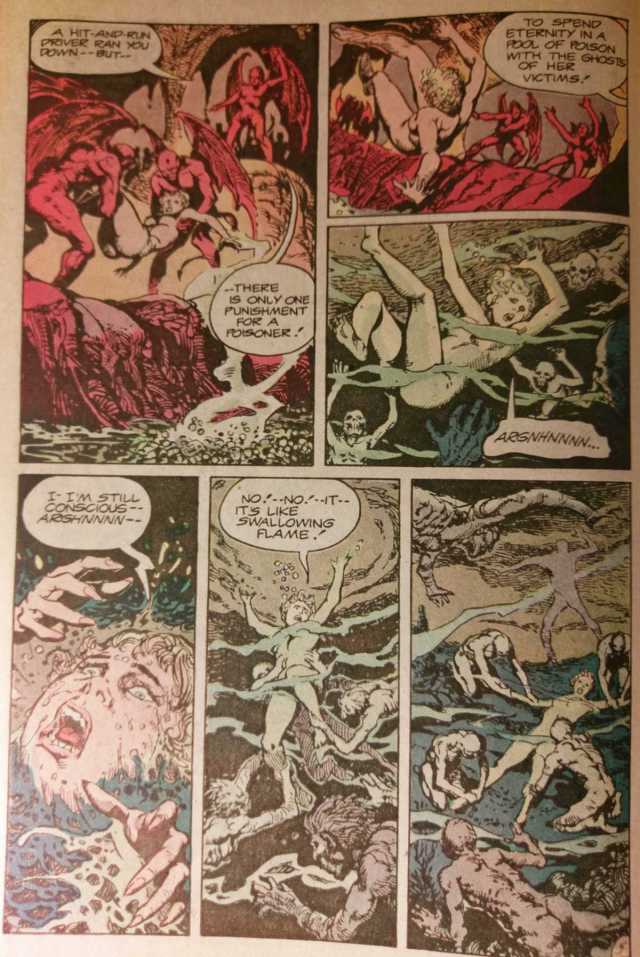 The next segment is rather controversial because the Arab is being punished for being a terrorist. He was apparently killed in his car by an Israeli rocket. The segment is very insensitive and one sided. That is followed up by the Black General, who I suspect is supposed to resemble Idi Amin, who thought he was getting more medals as he left the elevator. He is going have his naked fleshed branded by demons forever.

The last person to be dealt with is the young, pretty, white woman. The devil tells her that she committed suicide because she thought she was getting old and would be forgotten.  He goes on to say that she she will be given a second chance because beauty is in the of the beholder and that she will always be beautiful. She is then pictured in a hospital bed with a doctor telling a nurse that it was a close call but she’s coming around. The devil then addresses Elvira directly. He says that mankind tries to deal with justice but often they just make matters worse. He says true justice, retribution, and forgiveness should be left to higher powers. He warns her, while pointing at the reader, that she should never come before him. 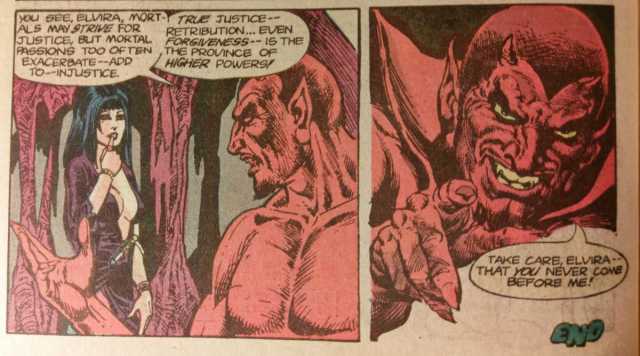 The last page of the comic has three men outside of the House of Mystery watching Elvira. Again I have no idea what’s going on here because I don’t know what’s happening in the story taking place across the issues.

Overall I thought this was a “wicked” fun comic. The art in each story was intense and dealt with some very adult themes. It is no wonder that this issue did not carry the seal of the CCA. The stories and the art look like they were something right out of an EC comic from the fifties. Each story also has the same style of twist at the end with a message that was very common in anthology books like this. Robert Kanigher would write several stories for this series, and while this was towards the end of career he obviously still has “it”.

If I were a betting man I would think this comic was probably only sold in the direct market. This does not feel like something that would have been sold on the news stand, because yes, in 1986 you could still get a comic at the supermarket or stationary store. It is simply too mature a comic to be sold next to Superman and Spider-man at the A & P.

Looking at the other issues in the series on Comicvine I suspect each one has a theme to the stories inside. The other issue I have, number seven, looks like it is a sci-fi themed issue. Now that I’ve finally got around to reading this comic it has graduated from something fun to pick up if I see it, to making the list of things that I will specifically look for in my searching. I’d like to read the whole series and see what’s going on with the overall story and the search for Cain.

I close out with an ad for the Elvira Fan Club that is at the end of the issue. If my younger thirteen year old self had this comic in 1986 he might have actually sent away to join this fan club. 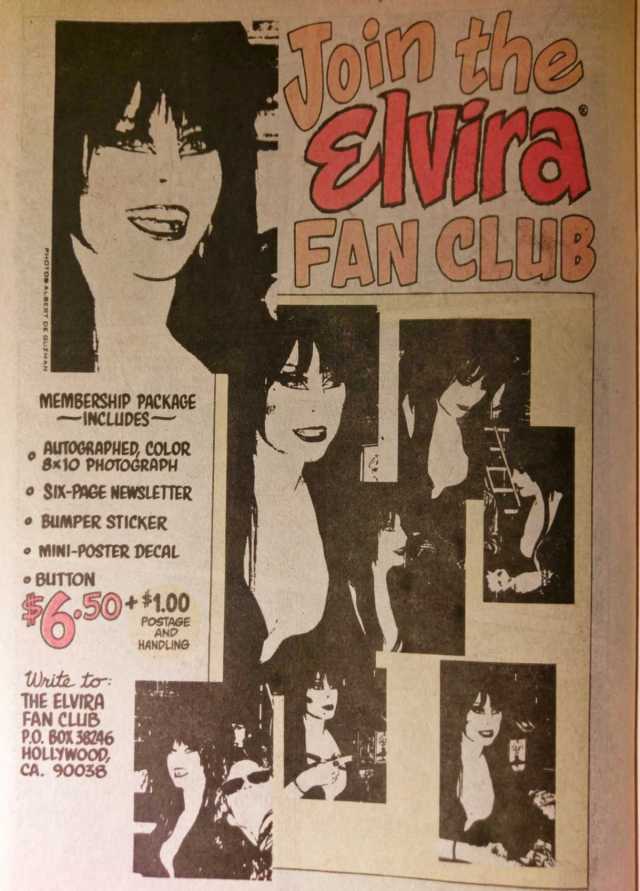 This entry was posted in Featured comic and tagged Elvira, House of Mystery, Robert Kanigher. Bookmark the permalink.

2 Responses to Elvira House of Mystery #3