“On September 15th, 1981, a boy named Jack Sawyer stood where the water and the land come together, hands in the pockets of his jeans, looking out at the steady Atlantic” – The Talisman – Stephen King and Peter Straub

Have you ever read a story that made you feel amazing?

One of my favorite novels of all time is the “The Talisman” writing by Stephen King and Peter Straub. The story is about a young boy who goes on the adventure of a lifetime in order to save his mother. Along the way he learns that he can travel between our world and another parallel world.  During Jack’s travels he meets good and evil men, he befriends a wolfman, and has horrifying experiences all in his search for the Talisman. When I read the novel for the first time it was an emotional experience.

When Jack starts his journey and “flips” into the parallel world for the first time I felt like I was right there with him. When King or Straub (I always believed it was King) killed off one of Jack’s friends I almost stopped reading right then and there and considered giving up King forever, I was devastated. When Jack finally completes his journey and, spoiler alert, saves his mother, I was overjoyed.

After I finished the first issue of “Seven to Eternity” I was overwhelmed. I could not believe how much drama and adventure was crammed into 22 pages. I could not wait to read the next issue and see what happened next. Now I know that everyone reacts to the stories they read differently. A story that makes me jump up and down might not get the next person out of bed but I cannot help but get excited when thinking or talking about this comic.

Creators
Issue one has the following credits:

Rick Remender has written many creator owned comics including; Fear Agent, Low and Black Science. While at Marvel he worked on titles such as The Punisher, The Avengers and Uncanny X-Force. He’s also worked on animated films.

Jerome Opeña has done a fair amount of work, much of it with Rick Remender. He worked with Rick on Fear Agent, Strange Girl, Uncanny X-Force and the Punisher.

The issue starts with a entry from the journal of Adam Osidis. The entry is meant to do some world building and exposition. Adam writes about his family and sets up the central conflict of the story. Adam’s father, Zebadiah, has moved his family away from the civilized world in order to get away from the Mud King – Garils Sulm. Zebadiah would not listen to the generous offer from Garils and tried to warn others to do the same. Apparently Zebadiah was in a minority and he decided to raise his family “a thousand miles away from any other two legged creature”. There are lots of other things hinted at or mentioned that we will learn about as the series progresses, the Mosak, ancient spirits, goblins and war. The story begins with a father and daughter hunting a giant boar. We don’t quite know it yet, but the father is Adam, the writer of the journal. He is coaching his daughter, Katie, through what will hopefully be the kill shot with her bow. Just as she fires Adam coughs up blood causing her to miss. Instead of trying again they alerted to trouble sound back at the farm.

A storm is coming as we meet the rest of the family. Adam’s father, Zebadiah, his wife, Nival, and several other children are watching ominous clouds approach. Suddenly a lightning bolt strikes the barn and Zebadiah and Adam tell everyone to get into a underground shelter.

Adam and his father get the animals out of the barn as another lightning bolt strikes their house.  Zebadiah appears to have an idea about what’s happening and tells Adam to get his “hammer”. In the meantime Zebadiah says some kind of prayer and his eyes start to glow a blue light, a third eye appears above his head and blue swords made of pure energy appear in his hands. The person apparently responsible for the storm and lighting floats before Zebadiah wearing a helmet that covers his eyes.

As the battle begins between Zebadiah and the mysterious villain we join Adam in the burning house looking for his “hammer”. The hammer turns out to be a rifle and some very large bullets.  By the time Adam escapes his home, now completely engulfed in flames, Zebadiah is losing the battle. He appears to commit suicide rather than allow the monster attacking him to win. The nameless antagonist gives Adam an ominous warning to “hear his offer” or he will return. Adam mourns his father’s death as everything burns behind him.

After the dead are buried Adam is preparing to leave his family in order to go to the Mud King and prevent any more harm coming to them. Adam tells his daughter Katie to stay and protect the rest of the family and then sets off on his journey. There is some great world building as Adam provides a monologue and we see lots of different landscapes until he reaches his final destination. 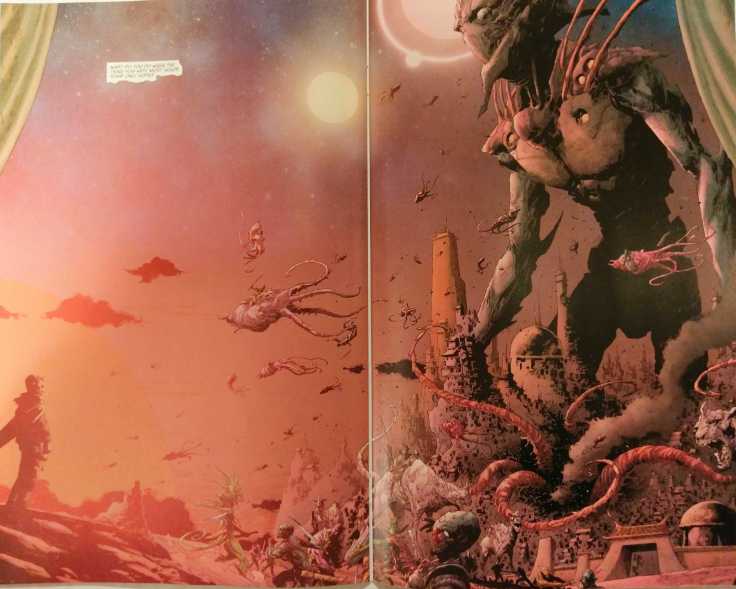 Adam’s trip has not been easy and he is accosted as he enters the city. Apparently his family’s name is well known and not well liked in these parts. A red elf-like woman appears before Adam. They evidently know each other. She is there to take Adam to see  the person he has traveled so far to meet, Garils Sulm. The comic ends with Adam standing before Garils, the man who attacked his family, and an old man groveling at Garils’ feet.

I’ve already stated that this comic blew me away. The art is spectacular and really suits what promises to be an epic tale. The reader is presented with just enough information to be able to follow the action and still have enough questions to make them want to read further issues. Why does everyone appear to hate the Osidis family? Who is Garils Sulm and what is his offer to Adam? What does hearing his offer even mean and why is it so bad?

For me Adam’s journey is very similar to Jack’s from “The Talisman”. He meets people along the way that help him or try to hinder his quest. There are flashbacks that really flesh out the characters and what their quest really means. One big difference so far is that Mr. Remender has not killed anyone off that made me want to rip the comic to shreds and swear off his work forever.

The issues that have come out so far have been collected in several trade paperbacks. The first two issues we also published in giant sized Artist proof edition. The third and fourth are being released in a similar giant sized edition in January 2018. I bought the first one because the art is amazing and it was reasonably priced at $24.99. I’ll certainly be adding the next one to my collection. If you are into that kind of thing then it is worth picking up.

Overall I think the comic is excellent and would recommend it to anyone. It is always at the top of my pile when a new issue comes out.

One thought on “Seven to Eternity”