Posted on May 27, 2018 by Jeremiah Jones-Goldstein 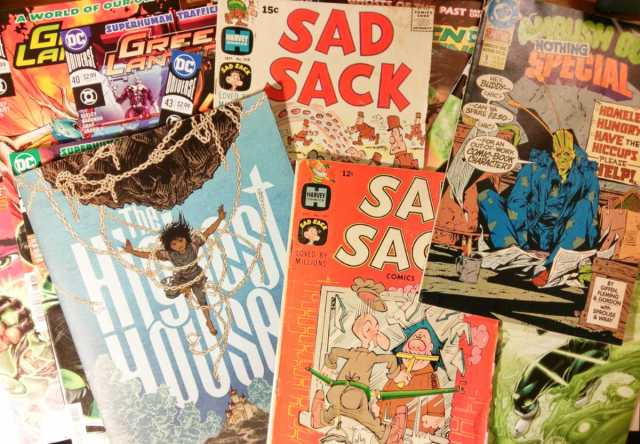 I’m going to try something different for my weekly column. Top of the pile was not working for me because of how late in the week I get my new comics. Instead of writing about what I am looking forward to reading I thought I would try writing about what I read during the week. I’ll typically have a mix of new and old comics and will do a mini review, synopsis, or just discuss the title itself. Let’s get started with one of the current books I was able to get caught up on.

These issues cover the story-lines; A World of Our Own parts 3 & 4, Super Human Trafficking parts 1,2 & 4, and Ghosts of the Past parts 1-3. Since I have gotten behind, I decided to plow through a whole bunch of them this week, despite the fact that I cannot find issue 42. Having an issue missing in the middle of series is the kind of thing that makes my brain itch and would typically prevent me from wanting to catch up on it. In this case itchy brain be damned I powered through.

Simon Baz and Jessica Cruz are probably characters that were thought up by an editor who one day decided “Hey, we need a Muslim character, make it a dude who comes from a troubled past. And maybe someone with some emotional problems. While we’re at it have it be a woman, you know to make it seems like our comics are inclusive!”. It is true, there needs to be more diversity in comics, but often it does just feel like a token gesture. Several comics I have read in the last few years have handled this idea really well I thought. Miss Marvel was really excellent. Sam Humphries, the first writer on the series, and now Tim Seely have really done a good job with Cruz and Baz. They have really written them in a sensitive manner with a deft tone that does not feel like pandering to me.

Across the entire arc of the series both Baz and Cruz have really grown. When the series started they were both new to the Corps without much training and now 46, bi weekly (cheaper my ass), issues later Cruz can make real constructs, Baz has ditched the gun he was carrying since the new 52 issues, and the both have quite a bit more confidence in themselves. Humphries and Seely have mixed up the stories between Earth and Outer Space. They have done quiet stories where both Cruz and Baz try to get jobs to pay the rent, to big outer space political stories (see the A World of of own Arc).

Similar to what Peter Tomasi was doing over in the Superman books, Seely puts plot points in some issues that end up showing up in later story lines. The dating app that Baz is using at the beginning of the World of Our Own story becomes the major story-line in the next arc, Super Human Trafficking. I really enjoy this method of storytelling because it makes the series feel very cohesive. It is not writing six issue arcs that are meant to end up in a trade paperback.

I really enjoyed the Super Human Trafficking story and it had some awesome cameos from the Bulletter (the one from the Grant Morrison Seven Soldiers Story), Blue Beetle, and Firestorm. The Ghost of the Past story has been really good so far and features Singularity Jain returning after the Oh Bolphunga, Where Art Thou two part story in issues 35 & 36. Maybe by the conclusion of this story we will get to the bottom of the tragic events of Jessica’s past that she has been trying to bury for so long.

I would recommend this comic and enjoyed getting caught up on it. Now if I can just find that pesky #42…

This magazine sized comic is something my brother recommended and says it is the best book he is reading right now. I picked up the first four issues and since finishing the first issue I pre-ordered #6 and will buy #5 on-line. The first issue was that good. The writing is engaging and the art is beautiful. It is high fantasy that is compelling and fun. I had the same feeling when I finished the first issue of this that I did when I read Seven to Eternity #1 for the first time.

The story features an unusual boy named Moth who is sold into slavery to the Magister. Moth is taken from his family and brought to the Highest House, where he is told he will spend the rest of his life. There is a lot of world building going on and plenty of interesting characters introduced. There’s a big guy who is pretty rough but seem to want to help little Moth. There is a pretty woman who has to train Moth and doesn’t necessarily treat him like the slave that he is. It is a really good introduction to the story.

I’m not familiar with Mike Carey or Peter Gross but if this story ends up being as good as the first issue I’ll have to look them up, see what else they have done. 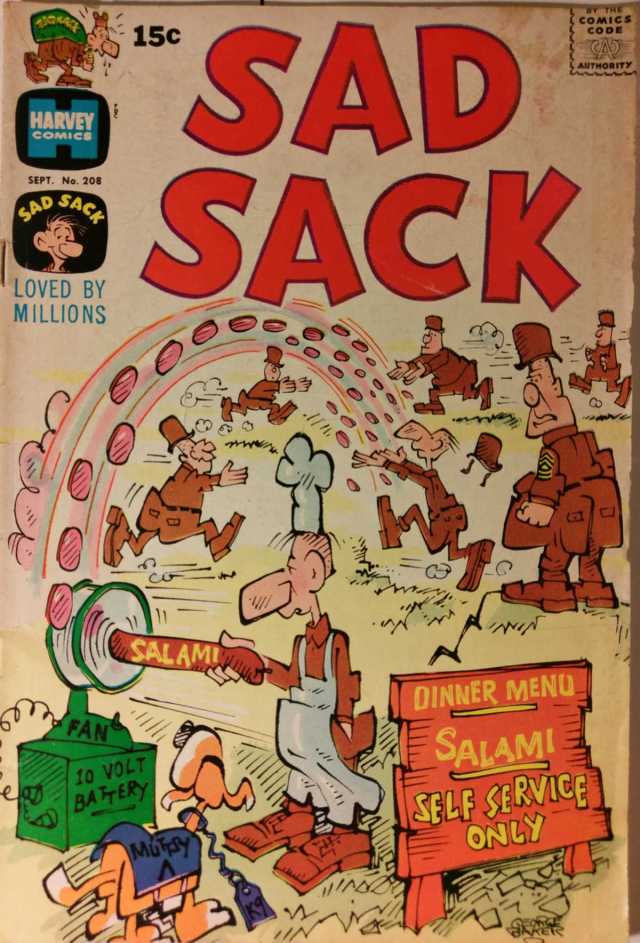 Over the last weekend I was at an annual local flea market and picked up a small pile of Sad Sack comics. The comics are beat to hell but still have the covers and are readable. I like picking up old Harvey comics if the price is right, especially Sad Sack.

I have fond memory of going on a trip to South Carolina with my father and brother to visit some friends when I was probably between 9 and 11 years old. The final destination of the trip was a condo on the Carolina coast but before we got there we spent the night at the people’s house that we were visiting. They had a couple of kids that were older than us, but I can only remember spending time with one of the boys who had a SWEET 12 inch GI Joe collection and piles of comics to read. I can remember reading Sad Sack in his room and thinking it was pretty funny. After that I don’t remember ever seeing a Sad Sack comic again until I was an adult.

These comics are gag comics that poke fun at some of the absurdities of military life. The comic is very similar in nature to the newspaper strip Beetle Bailey. Each issue is mostly one page gags, intermixed with two or three stories that last a couple of pages. The strip features several other regular characters The Sarge, The General, Slob Slobinski, and my favorite Hi-Fi Tweeter. Hi-Fi is the slick character who wears sunglasses and always has an angle. His name just cracks me up.

The series was created by Sgt George Baker and as far as I can tell he did all the work on the comics as well. His signature is on the cover of all the issues that I picked up and in the indicia he is listed as partial copyright owner with Harvey Comics. The comics also have some great advertisements to sell greeting cards for prizes, frontier cabins for kids, and a Revolutionary war toy soldier offer with an actual photo of the toys. In the ad you can clearly see that they are solid colored “flats” instead of plastic three dimensional toys. I still enjoy comic strips and really dig being able to pick up an old comic once and while filled with silly gags.

This and High House were the highlights of the week. Ambush Bug is a satirical comic that does not hesitate to poke fun at anything it seems. This special from 1992 features an out of work Ambush Bug hopping around the DC universe trying to find a job. Eventually he decides that he wants Julius Schwartz’s good will ambassador job, and he’s told it’s his as soon as Schwartz meets his demise. Of course for the rest of the comic Ambush Bug time travels to try and find a point in which Julius Schwartz is no longer alive. He never gets there.

Giffen and Fleming spend the entire comic making fun of other DC characters like Swamp Thing and Neil Gaiman’s Sandman, the DC summer Ecilpso event that was running at the time, Julius Schwartz, themselves and the other creators, and the comic industry in general. Since this comic came out in 1992 there are several biting jokes about the young Image comics and the creators who started the company. Cheeks the teddy bear that was featured in previous Ambush Bug comics even makes a brief appearance. 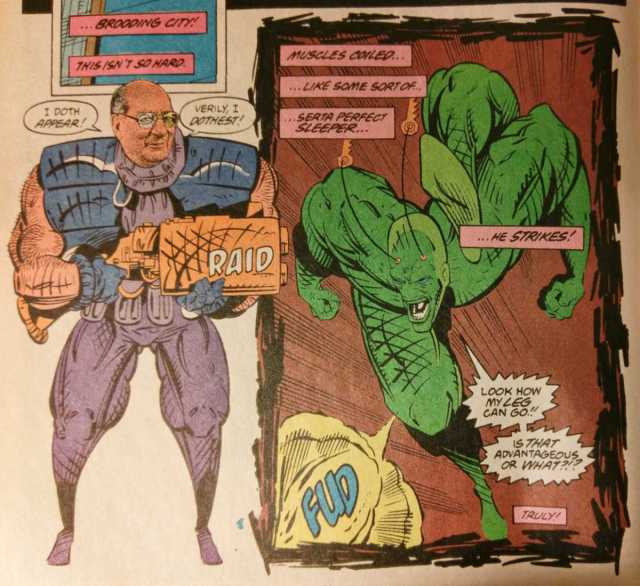 I dig the dark humor of Ambush Bug and am always glad to come across one in the dollar bins. I was able to appreciate this issue even more having listened to Chris and Reggie’s Cosmic Treadmill episodes #81, Ambush Bug stocking stuffer, and #8, Sugar and Spike. There is a great Sugar and Spike at the end of this comic that I would not have understood had I not listened to that podcast.

I read some really good books this week. I am really looking forward to see what happens in the next issues of Green Lanterns and The Highest House. We’ll see what’s in store for the coming week.