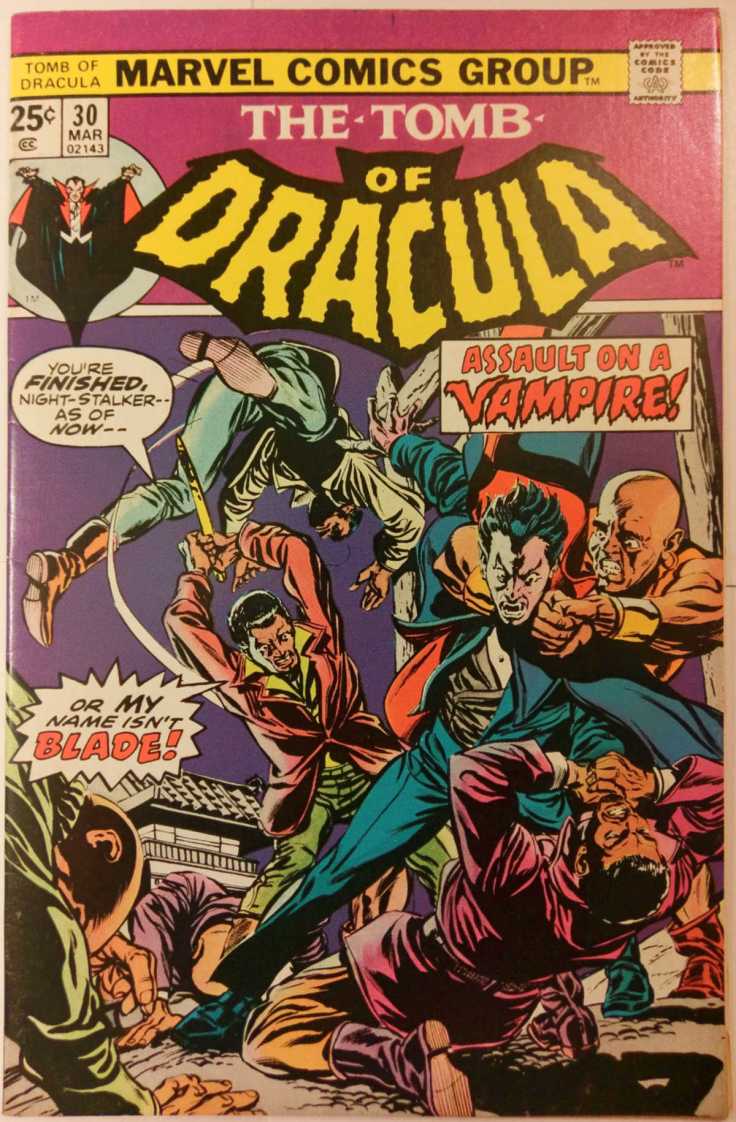 “Hidden in the shadows where legend and reality merge, there are tales of being who has lived more than five hundred years, they say he is a creature born not on earth, but in the deepest bowels of Hell itself. They say he thrives upon the blood of innocents, that he his the king of darkness…the prince of evil and that even the bravest man quakes in fear at the merest mention of his name..Stan Lee presents TOMB OF DRACULA”

Last autumn at the Baltimore comic-con I attended a panel where Mark Evanier and Marv Wolfman interviewed each other. One of the questions that Mark asked was what comic was Marv most proud of, other than the Teen Titans. Marv’s answer was Tomb of Dracula. I was floored, because I didn’t know that he had worked on this title, or that he wrote it for as long as he did. I was also more than a little curious. I knew the title was one of Marvel’s seventies horror comics, but other than that I knew very little about it. As he went further into more detail about why he was so proud of the work I became more and more interested. He talked about how great Gene Colon’s art was. He talked about how much he enjoyed working with Len Wein, editor issues 30-37. I’ve been working on putting together a complete run of Marv Wolfman’s Teen Titans, and I decided at that panel that I’d also have to look into Tomb of Dracula.

Tomb of Dracula is highly collectable comic, not something found in dollar bins. Issue #10 is the first appearance of Blade. On mycomicshop.com VF issues sell for $300-500 and high graded copies go for upwards of $1200. It also ranks pretty high on top Bronze age comics lists. Of course the first issue is also pretty expensive for a casual fan. I’ve been able to pick up a few issues here and there at conventions, mostly in the five to ten dollar range. Marv Wolfman was right to be proud of the comic, it is excellent. The drama in each issue is compelling. He was also right about Gene Colan’s art. It is perfect for the story. It is incredible how well he sets the mood in each issue. His Dracula is imposing but at the same time he draws you in, just like the Lord of Vampire’s is supposed to. Tom Palmer’s inks and coloring really supports Colon and all of it put together makes for an great horror comic. Let’s examine one of the issues I picked up recently. 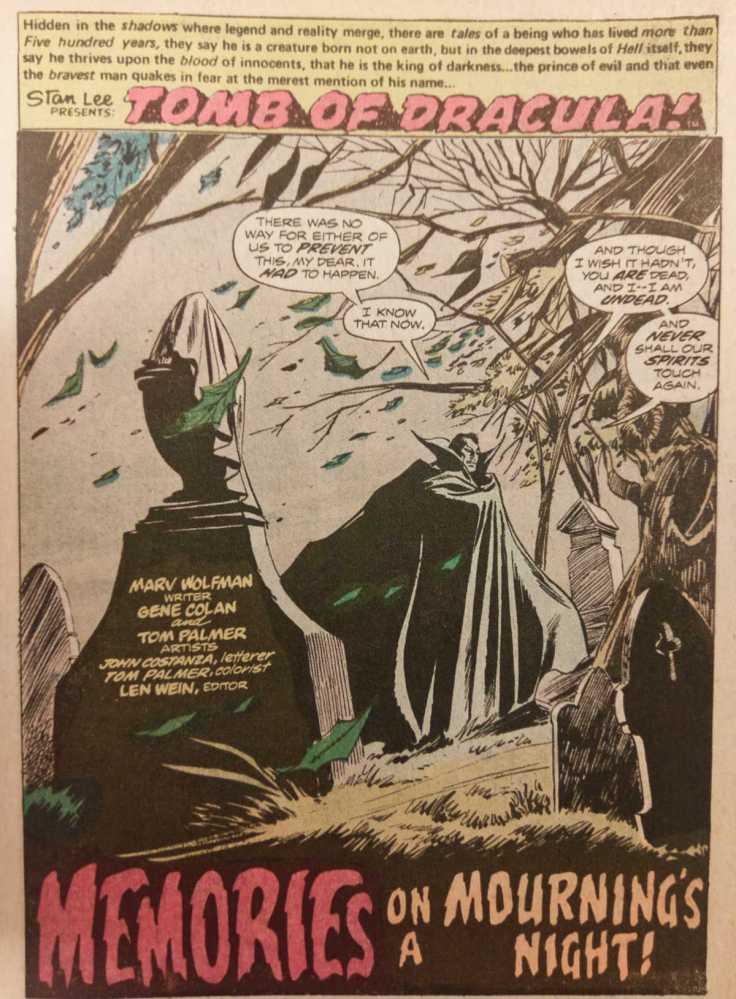 The issue starts with Dracula in a cemetery addressing the tombstone of Sheila Whittier. He’s sorry that Sheila is dead and that they could not be together. He never says the word love but whoever Sheila was, he sure does miss her. Once I find a couple issues before this one I’ll be happy to find out who Sheila was and why Dracula cared for her so much. As he wishes her farewell he starts to transform into a bat and flies off to Castle Dracula.

He is in a reflective mood after his visit to the cemetery and decides that instead of seeking out new victims he will spend the evening writing in his journal and laments that his diary is the only thing that comforts him. What follows are three short stories, sort of a clip show, detailing his previous suffering and pain. 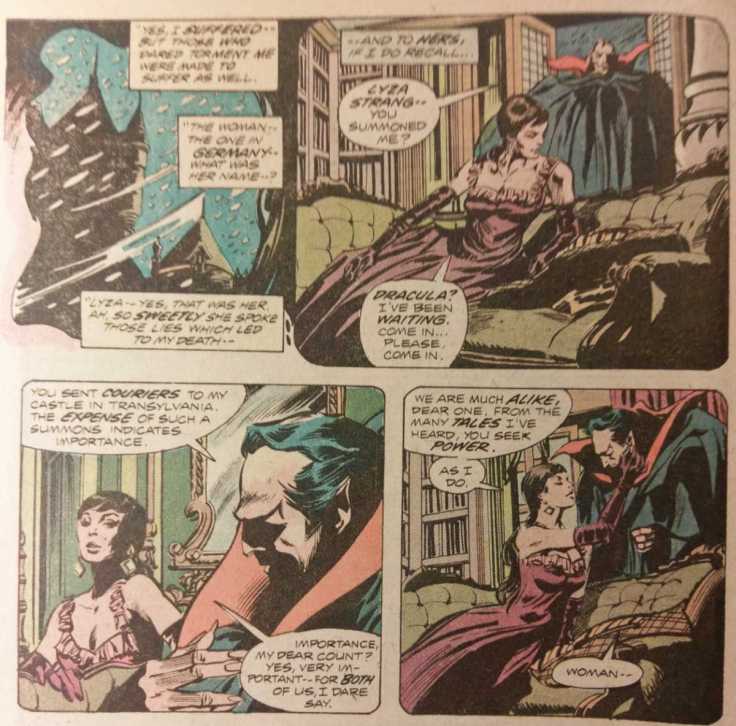 In the first episode Dracula remembers being summoned by Lyza Strang who has asked him to visit her in Germany. She tries to seduce him in order to convince him to kill her husband. She tells him that her husband, Archibald Strang, has aspirations to become Minister President of the German states and that he will declare war on Dracula’s Romania. Lyza tells Dracula that if he kills her husband, Otto Von Bismark will become minister, and that he is a peace loving man. She explains that if Bismark were in charge she and Dracula could be pretty well off.

Dracula decides, hey, why not kill him. Dracula does not need anyone invading his native land. He flies off to find Archibald. He comes across him and dispatches him quickly. As he is finishing him off, preventing him from becoming a vampire, Dracula is set upon by guards brandishing wooden spears. They are being lead by none other than Lyza. Dracula is staked, but not destroyed. Lyza tells the men to dump his body in the river. Dracula realizes he had been tricked, that Lyza was the real winner. Her husband was dead and his murderer, the only one who could tell the truth about Lyza, was floating away in the river. He also notes that not making sure he was completely “dead” was a great mistake. 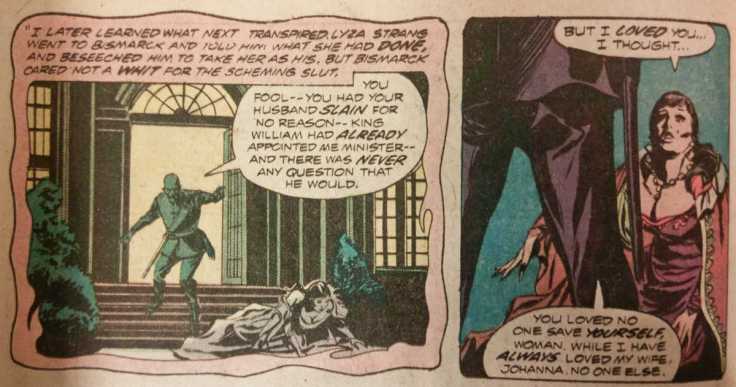 What happens next is rather shocking. Lyza had gone to Bismark as planned, but what occurs is not at all what she expected. Otto kicks her out of the house, with some seriously strong language for a comic, see the above panel. He tells her that the King had already named him Minister, there was no need to kill her husband Archibald. Otto tells Lyza that he has always loved his wife, and that he could never love her. He banishes her. As she runs through the woods she is set upon by Dracula who notes that she really had lost everything. 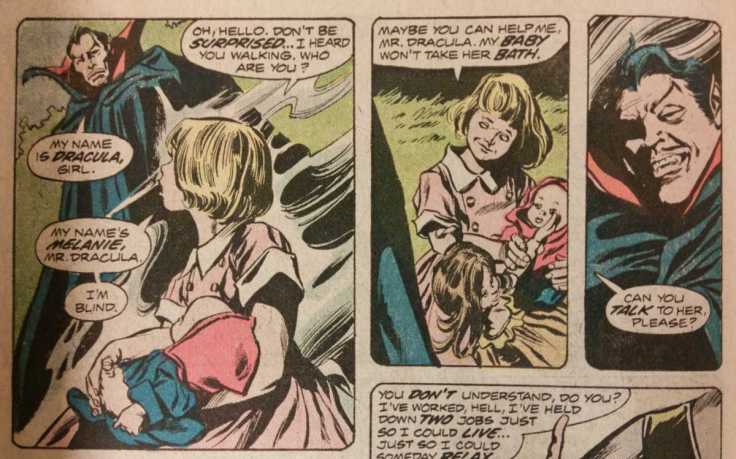 The next tale is even more shocking. Set in the modern era we see a young girl playing with her dolls in the yard. Her parents are inside arguing about money. The man of the house, visibly stressed, is telling his wife that they cannot afford to send their blind daughter to a special school because he has lost his job. They might not even be able to keep the house that they live in. Dracula approaches the young girl and she says that she heard him coming. She invites him to play with her and her dolls. Think Frankenstein’s monster and the little girl by the lake. Meanwhile the argument inside the house escalates when finally there is a loud BAM. Dracula rushes in to investigate only to find that the husband has shot and killed his wife. He explains it was an accident, that she would not stop slapping him, pushing him. Enraged Dracula flings the man from the house, furious about what he has done to the young girl’s mother.

As Dracula dispatches the father, the young girl questions who is screaming. Dracula explains to her that her father had killed her mother and that he had killed her father. To Dracula’s dismay the young girl shouts that she loved her daddy, that she cannot believe Dracula killed him and that she hated him. Dracula writes in his journal that he did not understand the girl’s reaction to him exacting revenge on the father and how that was the right thing to do. He also notes that he left the girl crying over her father’s corpse. 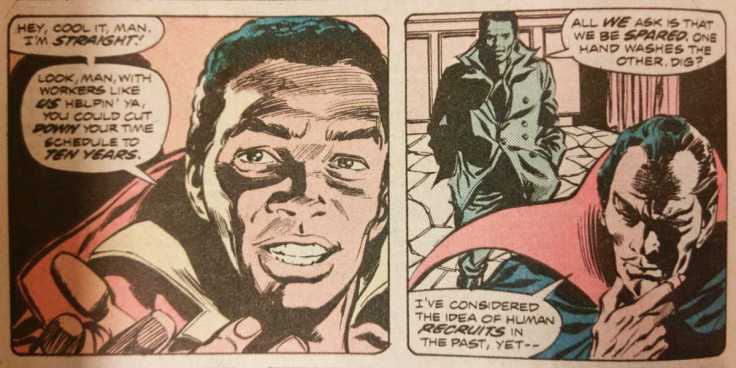 The final journal entry is apparently Dracula’s “greatest” defeat. In China, circa 1968, Dracula is approached by none other than Blade. This is apparently their first meeting because Dracula does not know who Blade is. Blade is there to talk to Dracula about a plan he has. Blade says that he and some others believe that vampires will rule the world in a few years. He wants in on the action. Blade explains that vampires need protection during the day and that he and his friends would like to remain human and provide that protection. Blade gets Dracula to follow him on his motorcycle to go and meet Blade’s friends.

When Blade and Dracula arrive at Blade’s hideout he and Dracula go into the main entrance together. As they enter the cave a wooden stake is thrust into Dracula. Blade’s men attack Dracula. They rush him and also stab him with a knife. Thinking Dracula is dead the men leave the cave to dig a grave. As the story comes to an end Dracula explains that he waited for the men to return, and in what must have been a dramatic fight, he ended up killing two of them. He also tells us that Blade got away that night and that he eventually killed a third member of the group.

The issue ends with Dracula in one of the castle’s towers, in the rain, giving himself a pep talk. He exclaims that he is Dracula, that even after all these attempts to destroy him that he will always live, that he is LORD OF THE DAMNED!

This was a horrific and thrilling comic. Marv Wolfman does some fantastic world building. I don’t know if the events that Dracula is remembering are events that actually appeared in previous issues or if they are just memories meant to give the reader a look into Dracula’s life. The opening speech at the grave makes me want to go back and find out who Sheila Whittier is and what happened to her. Colan and Palmer’s art is stunning. There is a real sense of dread throughout the story. It is also very cinematic and flows incredibly well. If it weren’t for the ads you’d almost forget you were reading a comic. All in all this was a great read and I look forward to finding more issues of the series at the next convention I go to.

I want to close this out with pictures of some of the ads from the issue. Along with the Charles Atlas and Learn Kung Fu ads, there are several advertisements for books that the reader could send away for to learn how to get a better job. I guess the advertisers figured that if an adult was reading this comic they must so bad off that they would surely be interested in opportunities in electronics careers or how to become a “cool” motorcycle mechanic. 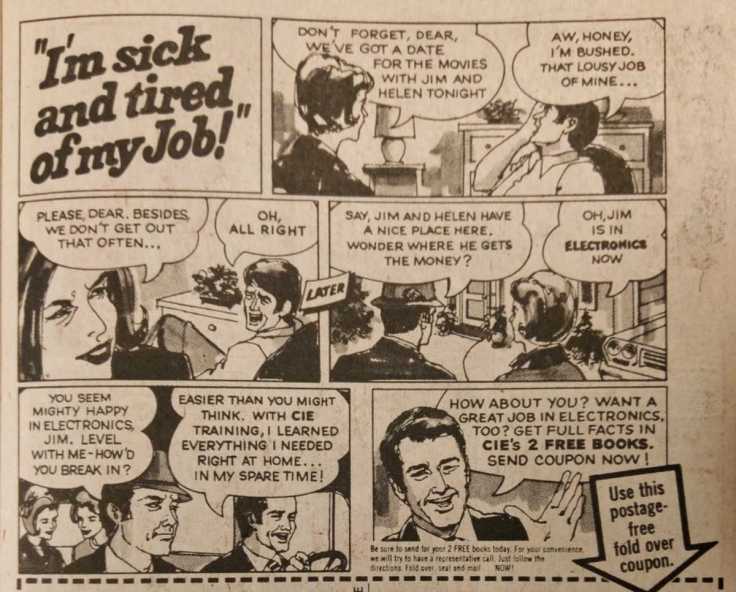 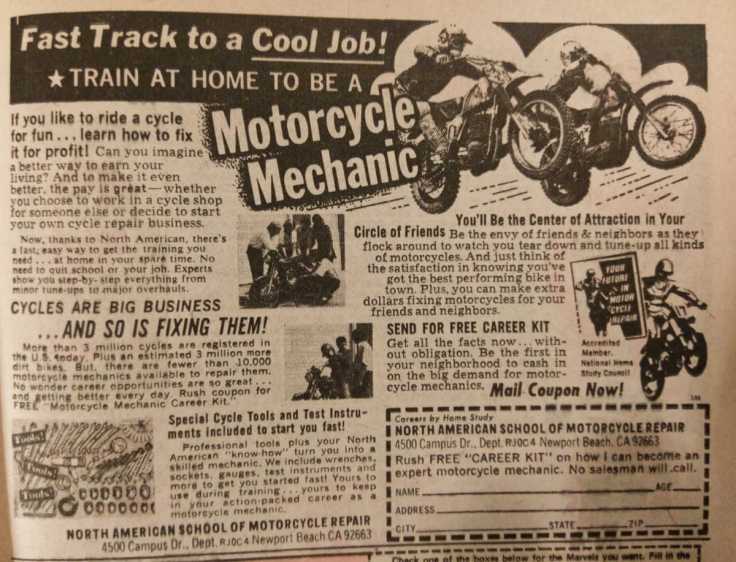