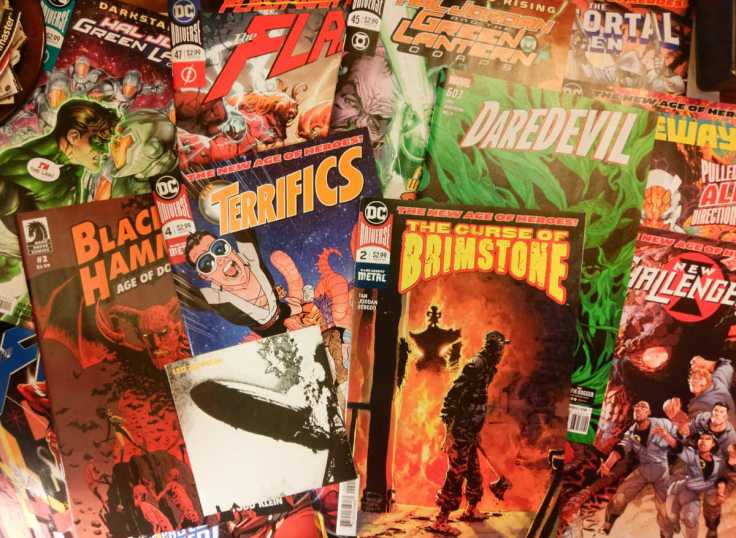 It is Saturday night, I’ve got Led Zeppelin on shuffle, and a pile of read comics next to me. This week I ended up reading mostly new stuff, catching up on a couple titles. I just picked up my new books today so I have not gotten to the new Doomsday clock, the DC Super Hero / Hanna Barbera one shots, or Blackwood yet. They are at the top of the pile for this coming week though. Let’s take a look at what was the best of week this week.

In the aftermath of the events of #600 the Hand still plagues the city and Matt Murdock is serving as acting Mayor while Wilson Fisk lays in a hospital bed. Issue 602 starts out with Matt doing what he always does when he needs to get himself out of what he’s doing and change into the red tights, he calls Foggy. When Foggy arrives Matt immediately names him chief of staff, having fired Fisk’s toadie Wesley in the previous issue.

Of course that is closely followed by Matt clearing the room except for Foggy, so that he can explain what he needs. He’s got to go deal with the Hand as Daredevil and he needs Foggy to handle the city. This is suddenly interrupted by Blindspot crashing into through the window. The mayor’s security rushes into the room and are just as quickly dismissed. Blindspot starts to explain that he thinks everything that is happening might be his fault. He made a second deal with the Beast (the first was in Daredevil 26-28) to kill Muse. He reneged on the deal and didn’t kill Muse. Muse might still be dead, he may have killed himself, Blindspot is not sure. Then Matt picks up a police radio call saying the One Police Plaza is being overrun by ninjas.

Matt leaves Foggy in charge and he and Blindspot head off to One Police Plaza to deal with some undead Ninjas. They have to battle their way into the building and along the way Blindspot gets hit with a throwing star. Once they are actually inside Daredevil tells Blindspot that something is wrong, everyone that was in the building are no longer there. The police and the Hand are both all gone. In the last panel we see a giant hole in every floor of the building with a black hole going into the earth.

The next issue starts off with Daredevil giving a monologue about how quiet the streets are at night since the Hand showed up while watching a woman on a motorcycle trying to get somewhere quick. The rider has a helmet with a dark visor on, but her identity is quickly revealed. A throwing star thrashes the front tire of the motorcycle. As the rider is thrown from the wreck they quickly toss of their helmet and draw two Sai. Elektra. We’ve not seen her since issue 6 and 7 of this volume. The Hand attacks and Daredevil joins the fray. After they defeat a couple of ninjas the rest suddenly take off. Daredevil explains to Elektra that he needs her help to save the city from the Hand and the Beast and after a little back and forth she agrees to stay and help. It helps that Daredevil can also tell her who was messing with her mind in those earlier issues.

Daredevil calls Foggy to tell him is he going to put the next phase of his plan into effect and that he needs to be patched through to Rikers Island. Over a conference call acting Mayor Murdock explains to Hammerhead, Blackcat, The Owl, and Diamondback that he’s going to let them all out of jail if they agree to use their criminal organizations to help protect the city and their individual turf. They all agree to this get out of jail free plan.

Back at city hall Murdock goes over everything he’s done so far with Foggy and then gives the ol’ New Yorkers are tough pep talk. Meanwhile we finally see the Beast surrounded by his acolytes. The head lackey tells the Beast that it is time for what comes next. The Beast then starts to exhale a green gas cloud that starts to spread throughout the city. Matt is on the city hall rooftop with Foggy and Blindspot. As the gas is rising up to them Matt is the first to notice it, super sense of smell and all that, and he goes down. Foggy, Blindspot and security get the collapsed acting Mayor back into the building. As the EMTs examine Matt we get a nice bit of explanation as to why inside city hall is not impacted by the gas cloud. After 9/11 the building was environmentally sealed against a chemical attack, so everyone will be okay as long as they remain in the building.

The issue closes out with a man in black armored suit complete with gas mask coming to city hall’s doors requesting to be let in. He claims he can help the mayor and the city and gives a demonstration dispensing the green gas cloud right in front of the doors. Foggy demands to know who the masked man in. He removes the helmet, says his name is Father Jordan and that he is Matt Murdock’s priest, see issue #15.

I enjoyed these issues and have liked this story line. I’ve liked the things Soule has done in this volume with Blindspot, Muse, and the whole Mayor Fisk story. He has certainly been walking a very fine line with writing a good political / comic adventure story and has not gone overboard with real political commentary. I hope he keeps it up, I’m really not reading Daredevil for political satire.

Since I buy around two thirds of what DC puts out each month I feel compelled to read the new stuff they release. It is really a mix of being really interested in trying new things as well as feeling a sense of duty to put my money where my mouth is when something new is introduced. I very often think to myself that I wish DC would bring back more of their older characters or write new ones, instead of having everything be Batman, Superman, and Wonder Woman all the time. With this line I get both of those things, with mixed success.

The Terrifics has been my favorite from the line. It’s got some really great classic characters put together as a quirky team, and who doesn’t love a quirky team? It’s got Jeff Lemire writing. While the first three issues had an art team of Ivan Reis and Joe Prado, who did a fantastic job, with this issue we get the great Evan “Doc” Shaner. The story in this issue really had it all, a giant alien octopus, some great dialog between Metamorpho and Plastic Man, planet Bgztl, and some great T-sphere jokes. 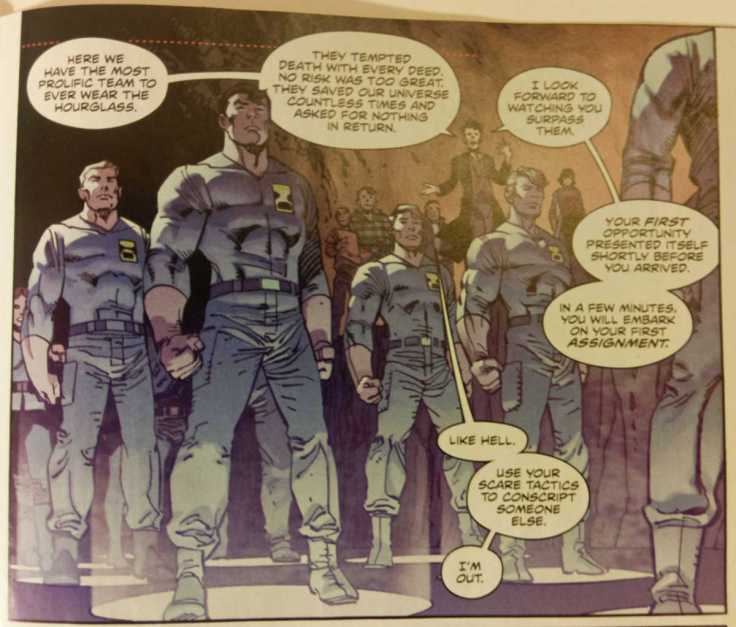 New Challengers was simply an introductory issue. Four strangers are teleported to and unknown location, hint it’s Challenger mountain. The “Prof” meets them after the third and fourth members of the team arrive. While our soon to be heroes have all kinds of questions they are told that they have all died, that they have been selected to join a team of adventurers called the Challengers of the Unknown, and that they are to “uncover, confront and solve the mysteries of our universe”. No biggie. The Prof further explains that while they are dead, they are also also alive existing in both states at the same time. While they are inside the mountain they will be fine. When they leave they will exist on borrowed time and that the hourglass tattoo on their forearms will track this. When time expires, so do they.

One of the new challengers, Brink, isn’t having it. The Prof opens a portal and tries to explain that his not being held against his will but if he leaves…He doesn’t get a chance to finish the sentence. Brink steps through the portal and immediately starts to dissolve. As soon as he is gone a new challengers appears through another portal. Shortly after that the reluctant team is sent on their first mission. The issue ends with things not looking good for the new heroes and the Prof monitoring the situation talking to a small flying robot(?) telling it that he thinks this team might work out.

I thought this was a good introduction and am interested to see where the story goes and if this book can survive. DC has not had a successful Challengers series since the sixties and early seventies. There have been a couple of attempts and some decent mini-series but not much else. It’s got Scott Synder and Andy Kubert on it and maybe have some big names behind it will help it last.

I’m still enjoying Sideways but the whole superhero wants to be a Youtube star thing could get old real quick. I’m going to see how the initial story wraps up and get into the second arc before making the final decision if I keep ordering this one.

Immortal Men is easily the worst of the bunch. Like the main character in the story, I have no idea what is going on. This issue we get some backstory on Timber, Ghost Fist, Stray and Reload. There is not much to say about this one other than that. 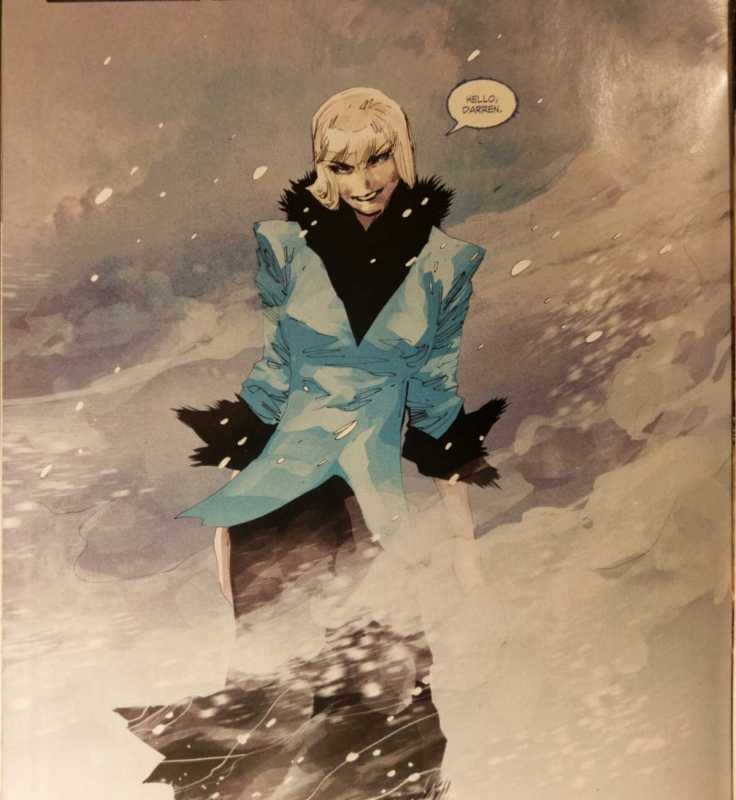 Finally there is The Curse of Brimstone. I really enjoyed the heck out of the second issue. Our “hero” Joe wakes up after an awful nightmare where as Brimstone he dreamt that he has destroyed the small town he wants to escape from so badly. It turns out it wasn’t a dream and that as Brimstone he apparently may have done considerable damage. The town is not completely wiped out but the people who granted him his wish in the previous want him to finish the job.

This book feels more like a horror comic than a superhero comic, or even a reluctant superhero. Joe and his sister find that whatever is going in York Hills has happened other places, but none of it has ever made the major news. It feels like something out of Stephen King’s “IT” almost. Philip Tan’s art really goes well with the story. It is a little reminiscent of Jae Lee and really adds to the sinister nature of the story.

All in all I am pretty happy with the New Age books and feel good about supporting DC’s effort to do something that isn’t Batman, Superman, and Wonder woman.

I’ve got plenty of other books to write about like, the beginning of the Flash War story (awesome), the final issue of the Green Lanterns story Ghosts of the Past (good ending), Black Hammer Age of Doom #2 (Lucy Weber vs the Devil), or Gideon Falls #3 (one freaky book). These issues along with about half a dozen other comics all deserve some praise but it is late and I don’t want to freak my editor out with another really long post.

I’ll close it out with this, if you want to read about Flash #47 head over to Chris is on Infinite Earths and read his excellent recap and review. You can also check out Weird Science DC Comics for their extensive reviews of DC titles as well as other things like Black Hammer and Gideon Falls.