I thought I might do something a little different and write about some of the comics I am looking forward to reading this week from the new release pile. Let’s get started with the first issue…

The Jetsons, like most of the Hanna Barbera comics in the line, has taken cartoon characters created over forty years ago and put them in modern, mature themed situations. Jimmy Palmiotti has updated the Jetson’s family but kept to the basic elements of the original cartoon.  George works for Spacely Sprockets and is a little goofy. His boy, Elroy, is blond and smart. Daughter, Judy, is pretty and a teenager. Jane, his wife, is intelligent and loves her husband. They are still what was once considered the ideal family.

In this series the whole family has been revised in ways to make them more appealing and less one dimensional. George is not some bungling duffus who happens to get by seemingly by sheer luck, but is instead very good at his job and is respected by everyone including his boss, Mr. Spacely. Elroy is a smart, young teenager who takes risks and is in love the Mr. Spacely’s daughter. Judy is not a stereo-typical self-centered teenager, but is instead a young woman dealing with growing up and everything that goes along with that. Jane is not a stay home housewife who loves to shop but is instead an important scientist who is trying to save the world and her family.

Palmiotti has done a nice job of writing a dramatic story without pandering or being too preachy. Pier Brito’s art has been splendid. He has really captured what is familiar about the characters but put his own spin on them.

The fifth issue was very touching and ended with an exciting climax. I am really looking forward to see how Palmiotti wraps it all up. Will it be a satisfying ending making me want more or will it be flat and fizzle out? We’ll see… 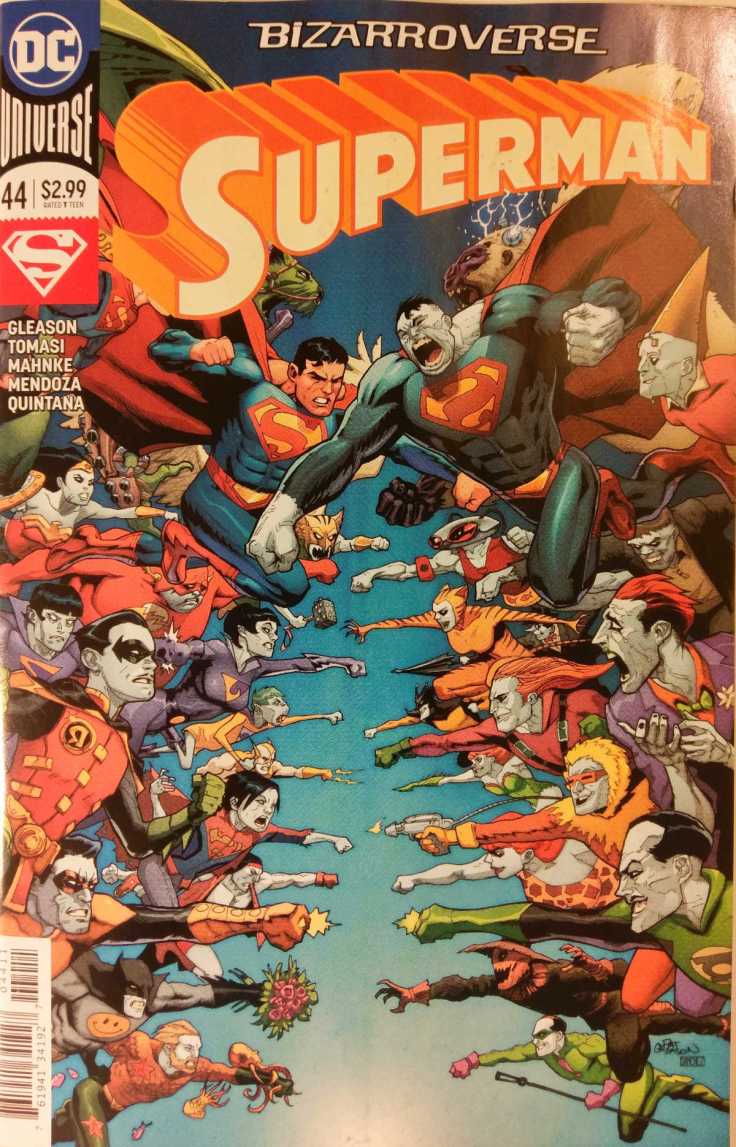 Peter J. Tomasi’s Superman run has been my favorite of all the DC Rebirth lines. One of the things I have really enjoyed is that Tomasi does not feel like he is writing comics that are meant to be published in six issue trade paperbacks. He is creating stories that feel natural and have appropriate durations. Plenty of story lines have only lasted two issues which to me has been fun and makes it seem like he is getting to tell the stories he wants to tell and how he wants to tell them. I am a little skeptical about what the future holds for Superman and I’ll miss Tomasi on this title when he is finished, but I’ve still got a couple of issues to enjoy before that happens.

This issue is part three of the Bizarro story that Gleason and Tomasi having been writing together. The story has been fun and it is neat to see this fresh take on Bizarro and the rest of the Bizarro family. It is not the final issue in the arc and I am looking forward to see what happens.

Doctor Starr and the Kingdom of Lost Tomorrows #2

Black Hammer was created by Jeff Lemire and Dean Ormston. The story of Black Hammer and characters in the universe has been published in several series at this point. The first storyline, Black Hammer, issues 1 – 13, introduces us to Black Hammer and his allies who are now trapped in an alternate reality. They do not understand how they ended up there and are trying to make the best of things. The series ends in a cliff hanger and has several shocking revelations about the bizarre situation the heros are in. Sherlock Frankenstein and the Legion of Evil, issues 1-4, was the first spin off and focuses on the Black Hammer’s daughter trying to figure out happened to her father and the other heros. Her investigation leads her to her Dad’s arch enemy Sherlock Frankenstein.

Doctor Starr so far has focused on one of Black Hammer’s allies who apparently did not end up in the other dimension that the rest of the heroes did. The series tells the story of Doctor Starr’s origins as well who the man he is now as he tries to reconnect with his son. Like Sherlock Frankenstein I assume this series will expand the Black Hammer universe and give us clues as to what happened to the characters from the first series.

Doctor Starr is a character that is very similar to the DC Comics character Starman, specifically the Ted Knight version of the character. Both Starman and Doc Starr are scientists, astronomers to be exact, and each of them create devices that they use to become heros. Similar to the James Robinson Starman comic that followed the adventures of Ted Knight’s son, Jack, there is a enjoyable melancholy tone to the series so far.

The Black Hammer story is so much fun that as each new issue comes out I can’t wait to see what new things we learn about these characters and hopefully get closer to discovering what happened to them. 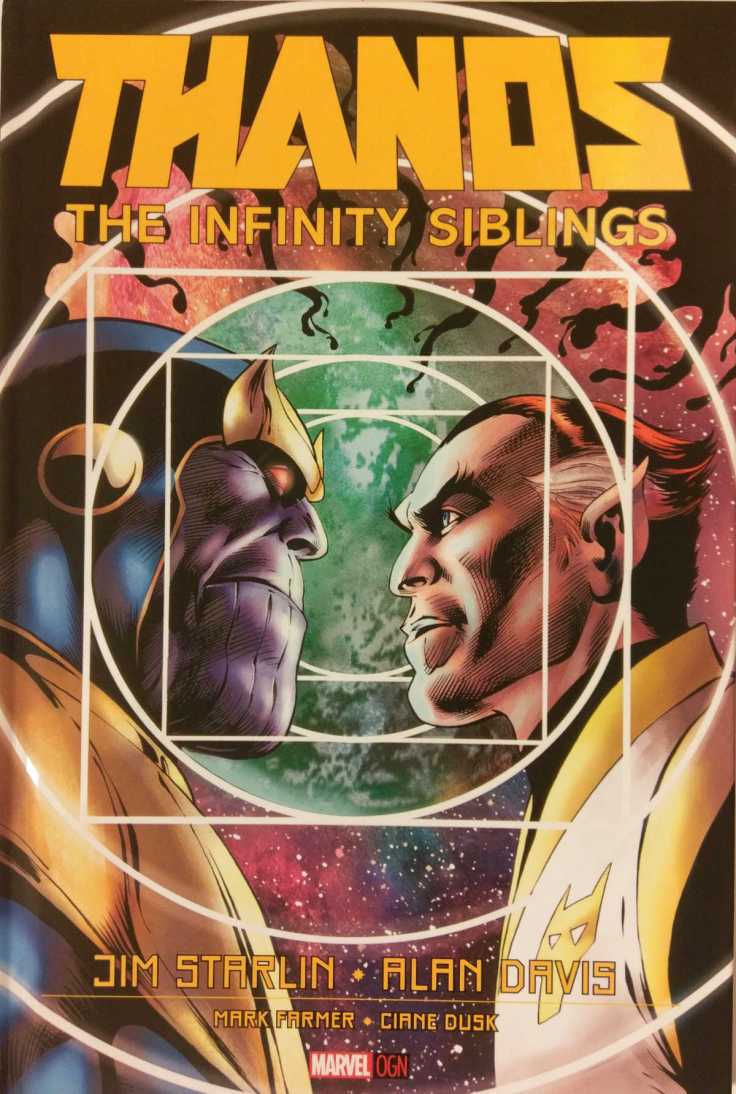 On the eve of the Avengers: Infinity War movie we get the first volume of the follow up to the Thanos Infinity trilogy (Finale, Relativity and Revelation). This is supposedly Starlin’s final series of stories with his creation, the Mad Titan himself, Thanos.

I’ve purposely avoided reading the advance stories and reviews of this comic because I want to go into it fresh. This is something I’ve been looking forward to for several reasons.

The first is that it is Jim Starlin. Like many others he is one of my all time favorites. His cosmic stories involving Captain Marvel, The Silver Surfer, and Thanos are some of the best comics ever published in my opinion.

The second is that this is a “real” graphic novel. It is over sized sized volume containing an original story published for this first time in this format. It is not a fancy collection of previously published stories, that my fiends is a trade paperback, not a graphic novel.

Finally, it is Thanos. Jim Starlin, and others, have done a lot of wonderful things with this character. He’s been a ruthless villain to a reluctant hero. He’s killed the Marvel universe and brought it back. Most recently he’s been brought seemingly to the end only to come back with a vengeance. See the Jeff Lemire (yes, the same guy I just mentioned above) run on Thanos, issues 1-12. Thanos is one of those characters I find it hard not to root for no matter what the situation is. He’s simply an iconic character with his purple grimace and blue and gold armor. Good Thanos stories are always something to look forward to, especially when they are written by someone as talented as the man who created the character, Jim Starlin.

I’ll close this week with a picture of the Thanos piggy bank that watches over me as I write this.