Over the last couple of weeks Marvel has released several True Believer comics reprinting key Thanos stories, such as his first appearance in Iron Man 55 and the first issue of the Infinity Gauntlet mini series. Thanos has come to be of Marvel comics most popular characters. On April 26th the Avengers: Infinity War will be released and Thanos will undoubtedly become one of their most popular movie characters as well. All of this got me to thinking about one of Marvel’s other fantastic cosmic characters, Captain Marvel.

The Death of Captain Marvel

The Death of Captain Marvel was the first “issue”  of Marvel Graphic Novel. Marvel Graphic Novel was a series of magazine sized comics, square bound, and printed on heavy stock glossy paper.  These were stories that were too “big” for regular comics. They often featured Marvel comics most popular characters like the Avengers (MGN #27 Emperor Doom), Spiderman (MGN #22 Hooky) but they also introduced new characters like the The New Mutants (MGN # 4) and The Futurians (MGN #9). They also featured some of the biggest writers and artists in the business, like Walt Simonson (MGN #6 Star Slammers), John Byrne (MGN #18 She Hulk), Chris Claremont (MGN #4 and 5 The New Mutants and God Loves Man Kills), and Jim Starlin.

These comics are what define a graphic novel for me. They are sturdy enough that they belong on a bookcase. They are bigger than a normal comic. They feature stories that should not be interrupted by ads for twinkies and toys soldiers. They are stories that cannot be told over the course of several months while the reader waits for the next issue. They were unique at the time.

Jim Starlin was born in 1949, served in the US Navy during the Vietnam war and has been working professionally in comics since the early 70’s. He has worked for both Marvel and DC. He has created numerous characters for the big two publishers, like Thanos and Mongul (co created with Lein Wein), as well his creator owned characters like Dreadstar. Some of his most renowned work at Marvel was on their cosmic characters. He wrote and / or drew some of the most well known runs on Captain Marvel, Warlock and Silver Surfer. He also did some fantastic work at DC including wiring the famous “Death in the Family” and the infamous “Cosmic Odyssey” mini series. Jim Starlin did two Marvel Graphic novels, one introducing his Dreadstar character and this one, The Death of Captain Marvel.

The story begins with Mar-Vell, Captain Marvel as he is known on Earth, dictating his autobiography into a computer. Our hero describes his early life as a Kree Warrior and how he became Earth’s hero Captain Marvel. As he is wrapping up his monologue he is interrupted by StarFox, real name Eros, son of Mentor and brother to Thanos. It turns out that Mar-vell, Eros, and Mentor have journeyed to the edge of our solar system to collect the body of Thanos, dead, now a stone statue (see Marvel Two in One Annual #2 for details).

As they are about to collect Thanos to return to Titan when they are set upon by his followers and a battle ensues. After the fight Mentor and Eros are interrogating one of the crew, who explains that they are waiting for Thanos’s resurrection. Suddenly Mar-vell begins coughing and Mentor suggests a mediscan. Mar-vell replies ominously that his cosmic awareness has already told him what is wrong and that the computer will likely confirm it. We learn that Captain Marvel is dying of cancer.

Mentor and Mar-vell discuss how this might have happened and how there is no cure. Mar-vell continues the dictation of his biography, detailing many of the events of his career; his time spent with Rick Jones swapping bodies using the Negabands, his fighting with the Avengers and other cosmic heroes, and finally defeating Thanos. He then begins the journey to tell the people he loves and cares about what is happening to him.

He visits his love Elysius, and Rick Jones. Rick is angry and denies that there is nothing to be done. He goes to the Avengers and then word begins to spread of what is happening to this hero. The greatest minds of the Marvel universe come together to try and save the captain; The Beast, Mentor, Dr. Strange, Reed Richards. All of them eventually become frustrated as they realize there is nothing to be done.

As Mar-vell lies in bed waiting for the end he is visited by his friends as they pay their respects. Finally, he is alone in the dark, and one more visitor appears. Thanos, seemingly back from the grave, comes to Mar-vell and challenges. There is a great battle that ends with the hero finally coming to understand what is happening as he finally looks Death in the eye (literally) and accepts her embrace. The story ends with Thanos and Mar-vell accompanying Death into the bright light. 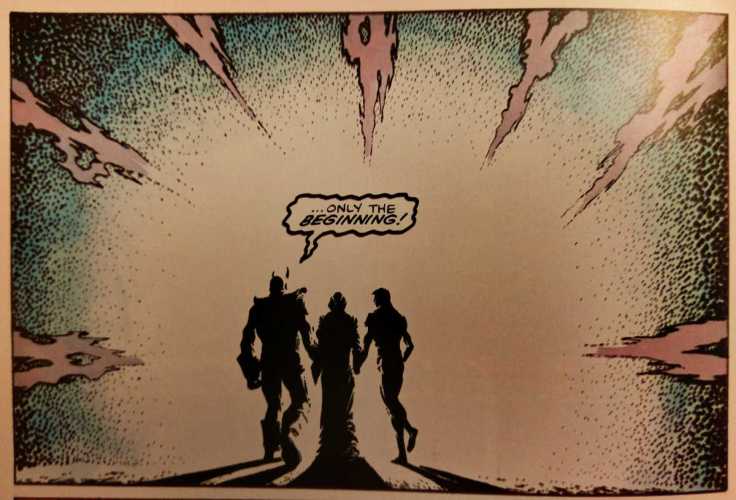 The story is touching and at the time groundbreaking. All of Earth’s mightiest heroes could not save Mar-vell, they could not defeat death. There is a very real sense of love and sorrow between the characters. There is drama not usual found in the standard fare of the time.  It is also one of the few times that a character dies and for the most part stays dead. Of course he’s come back a handful of time but since this story he simply has not been a major part of the Marvel pantheon. It has been said that no one dies forever in comics, except Bucky, and eventually that proved not to be true.

Will Captain Marvel, the Kree Warrior, ever return to the greatness he achieved when Jim Starlin was writing him? Who knows. For now we’ll have to enjoy our old comics, like Marvel Graphic novel #1.

I’ll close with a short story about the first time I had the pleasure of meeting Mr. Starlin at the Baltimore comic con. I thought he was very friendly and eager to chat with the fans looking for autographs. I have a hard time talking to comic creators so when it was my turn to have something signed I asked him what I ask most creators, “What are you currently working on?”. At the time it was mini series that Marvel had commissioned with the Hulk that they had later titled Thanos vs the Hulk. The problem was, as he explained, the original pitch only featured Thanos in the first half of the story, the second two issues did not involve Thanos at all. He was having to turn what was originally a Hulk story that had cameos of other characters into a Thanos story. Finally I asked him to sign my sketchbook / autograph book and he was kind enough to add a quick profile sketch of Thanos. Meeting Mr. Starlin was a real treat and one of my favorite interactions at a convention.