A Kin of Homecoming

This falls under the category of comics series I bought because I thought they looked cool and then never read. This afternoon I was working on the collection and came across my run of this and American Vampire (another Vertigo title in that same category). I decided to pull out the first issue and give it a go.

The story opens right away with a big ol’ swear, I assume for the effect of letting the reader know that this is an adult story. I would have thought the Vertigo imprint would have been enough for that but here we are. Several men are on a hill checking out a group of men on horseback in the distance. They are trying to decide if they are going attack, rob, or maybe join up with, we don’t really know. These men are approached by another rider who seems to know them.

The mystery rider dismounts and addresses the group. There is some back and forth about how the men thought the new guy identified as Wes, was dead in prison. The story apparently takes place at the end of the Civil War and these men were Confederate Soldiers, who now on the losing end of the war, have lost their land to Union Soldiers and carpetbaggers, but that term is not used. There is some very derogatory language, probably meant to be period appropriate, but definitely unnecessary.

One guy asks Wes who the rider is that accompanied him. Wes, pointing to a circling buzzard, says that he’s been with him since he got out of prison. Now things start to get a little tense. Wes makes a smart remark asking the group if they know why a buzzard might follow him and at the same time moves the poncho away from his shooting arm, as his right hand grips his pistol. We get a nice series of panels of close ups on the men’s faces and hands as they go to their pistols, a la “The Good, the Bad, and the Ugly”. The group suggests that Wes should move on to which he disagrees vehemently and then proceeds to shoot the entire group.

In the next scene a group of Union soldiers, a white officer and several black infantry men, break into a home while a woman and two children appear to be having dinner. The three of them are subdued while the officer tells the other soldiers to look for “that murdering scoundrel”. Another officer joins the soldiers asking if the premises are secure. The two officers rather crudely and violently question the woman and children stating they are looking for her son Boyd Johnson.

One of the soldiers interrupts the questioning and directs their attention to a young man trying to get away from the home on crutches. As the two officers realize that the kid trying to get away could not be the shooter they are looking for one of the infantry men fires and the mother screams outs the boys name, Tyler. 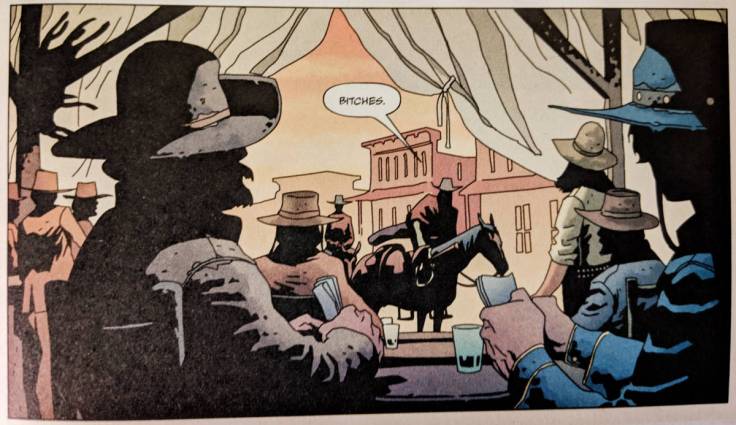 We join Wes and his still unseen companion as they ride into town. Wes questions the undertaker, currently working on a coffin, if the nearby body is Tyler Johnson, to which he replies with the affirmative. Wes greets the people around town, including the locals in the saloon. They seem to know him and are surprised he is alive. They also apparently know that he’s killed his former riding companions.

Wes has a drink and then gets into a bit of an argument with one of the saloon patrons named Frank. Frank is pissed about the way Wes is invoking the Lord’s name to which Wes replies with a comment about how they took up arms for what they believed to be right and righteous. He goes on to say how wrong they were and swears some more, again, to remind us that we are reading an adult story. Wes has apparently abandoned his religious beliefs after having been through whatever he’s been through. When Wes goes to leave the men ask where he’s headed.

Wes replies that he’s headed back to his land to be with his woman. One young man tries to warn him but Frank tells him to shut up. As he approaches his home he is actually talking to his companion about the mule carrying the bulk of their cargo, that is apparently on its last legs, literally. Wes eventually goes off on a curse landen rant about how everyone; blacks, whites, Native Americans, North or South can go **** themselves. The vulgarity of the dialog in the comics continues in the rant.

When the two riders finally get to the house several Union soldiers greet them and Wes ever so politely tells them to get off his land. A brief brawl ensues and Wes proceeds to drive the men away. Wes then points points his revolver at his companion and tells them to get off the horse, lose the pistol and the pants.

It turns out, surprise, that Wes’s traveling companion is his lover / wife Ruth. The comic closes with the couple making the beast with two backs under the moon. In the final panels the poor mule collapses, revealing that it was carrying a large crate of dynamite. I expect that this mean something in a future issue.

The story appears to be a pretty standard tale of the long lost hero returning to reclaim his old life taking place at the end of the civil war. For a Vertigo comic the sex, swearing, and violence do not feel out of place, they just feel predictable. This first issue feels like any run of the mill spaghetti western with the exception that the heroes love interest is not dead. It is still set up as a tale of revenge, just not the standard avenge my dead wife story.

As I think about it, that is actually a pretty progressive idea, that the female character is not dead / hurt / raped or otherwise degraded in order to give the male character a reason for doing what he is doing.

The art is pretty fantastic. I am not familiar with Marcelo Frusin’s work but since he is listed as one of the creators I assume that he goes on to draw the rest of the series. Both Azzarello and Frusin are obviously fans of the Western genre as the comic does have a very cinematic quality to it. The story is well paced and as I read it I could hear Ennio Morricone’s haunting score from “The Good, The Bad, and the Ugly”. With the exception of Wes’s long hair and lack of ever present cigar he is clearly modeled after Clint Eastwood’s Man with no name.

All in all it was an decent story with art that was better than the dialogue, but good enough to make me want to dig out the rest of the series to see what happens.